Providing Entrepreneurs with Innovative Solutions, Tools, and Trainings to Brand YOU and Take YOUR Business To the Next Level Since 2008
Menu
RISK FREE TRIAL
Home » Personal Development » Mindset: Get Inspired » Be A Child When It Comes to Failure 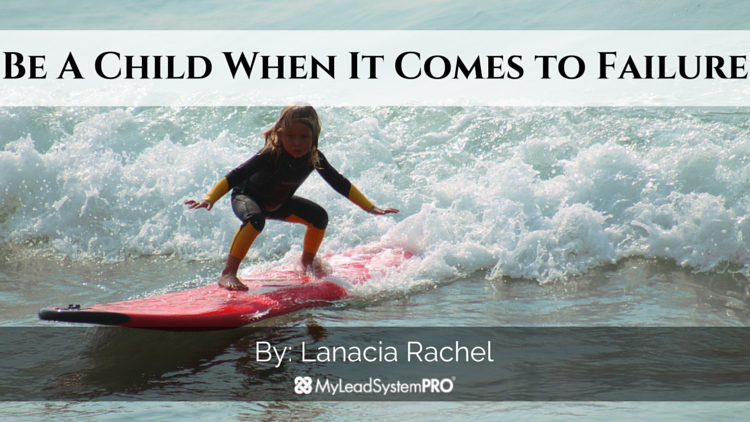 In business everyone has a failure or setback. It’s the nature of business.
Sometimes you win. Sometimes you lose. But it’s how you handle those setbacks or failures is what sets the successful apart from everyone else.

Have you eve watched a child learning to color in the lines for the first time. The teacher or parent instructs them on what to do. Then hand the child a coloring book and some crayons. The child picks up the crayon and begins to color. Of course, they color out the line. It’s their first time. It’s to be expected. So what do they do? They go to the next page and try again. Each child tries different ways of coloring to accomplish the task. They mess up. They go to the next page and try it again. Eventually, they are coloring like a pro.

I remember when my son first started skateboarding. He would be outside for hours trying do an ollie. He sprained his back multiple times, hurt his knees and elbows and has countless bruises. But to him, the ultimate success was to do an ollie. For those that don’t know skater speak, an ollie is a skateboarding trick where the you and board leap into the air without the use of the your hands. He tried this trick hundreds of times until he got it right. Through all the pain it was worth it for him to accomplish this trick. Even though he’s done an ollie successful multiple times, every now and again, he can’t do the trick. But he doesn’t let it discourage him. He just does it again.

As we age and become adults, our view on failure changes. Some allow failure to define them so, they give up on their dreams. Others try a few times and stop because they don’t want to fail again. Others get discouraged and think, “I’m never going to get this,” and give up. But if it’s something that you truly want, you have to fight through the pain and try again and again until you succeed.

Here’s a perfect example of acting like a child when it comes to failure. At 4 years old, my niece, Layla, decided she wanted to experience what it would be like to slide down the stairs. To her it looked like fun. Before I go any further in the story, I want to give you a visual. Below is a picture of the type of stairs they have in their home. 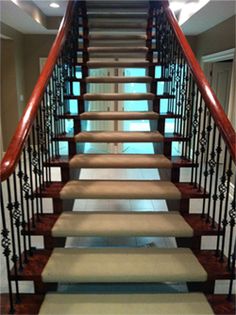 Layla decides the best way to slide down the stairs is in a laundry basket. She and her sister have pushed each other around in a basket before. “It seems pretty smooth. It should work out great,” she thought.

She proceeds to the stop of the staircase with the laundry basket. She sits in. Her sister stands behind her.

Layla flies down the stairs. Although it’s a little bumpy, she is having the time of her life. And then…

As she reaches the bottom of the stairs, she falls face first into the tile floor below. The ride was fun while it lasted, but it was an epic fail.

She crying, her mouth is bleeding and her mom is wondering, “What in the world is going on?”

Her mom sees the laundry basket on the floor and can only guess what happened. She frantically gathers the children and heads to the hospital. By the time they arrived at the hospital, Layla has stopped crying. She’s feeling better and her mouth has stopped bleeding. She then notices that her 2 front teeth are gone.

The ER doctor checks Layla out and tells her mom that she will be fine. She lost a couple of teeth, but soon her new teeth would come in. Her mom is relieved.

The doctor turns to Layla and says, “I bet you won’t do that again.”

Without hesitation, Layla says, “Yes, but next time, I think I’m gonna wear a helmet.”

Yes, it hurt! Yes, she lost something! Yes, she cried! Yes, she failed! But guess what?

She persevered. She shook it off and thought of her next move. She tried to do the stunt again, this time with her bike helmet. But her mom caught her before she could, thank goodness.

But that’s the tenacity of a child. A child will try something over and over again until they succeed. And we have to approach our business with the same tenacity.

As adults, we need to change the way we think about failure. Failure is not a negative, it’s a positive. 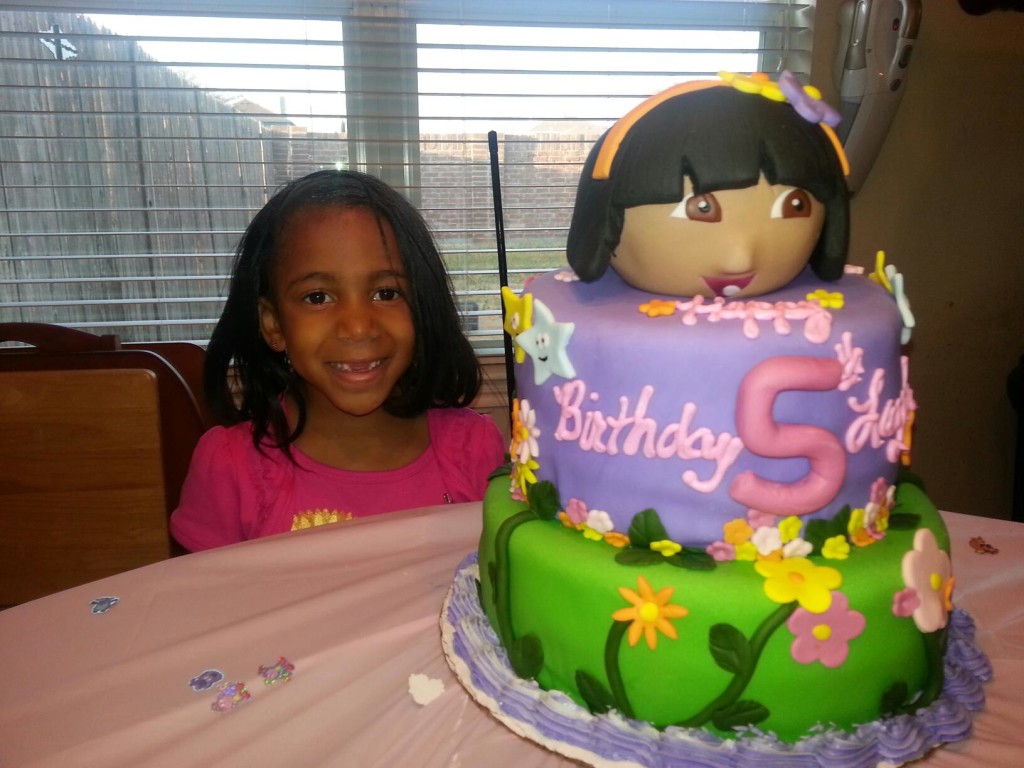 Failure is a necessary component of success. Failure is how we learn what works and what doesn’t. Failure helps us find out what works for us so we can succeed.

You are going to fall, but that doesn’t matter, what matters is how long you stay lying down. It may hurt. You may want to cry. You may want to throw your computer out the window. You may even want to quit.

We all fail. We’ve all fallen down. It’s how quickly you pick yourself and dust yourself off that is the strong determinant of success.

How many kids do you know, that climbed a tree, feel down and said, “I quit! I’m never climbing a tree again?” None! They dust themselves off and climb the tree again.

When you fail, it’s an opportunity to learn, grow and improve. Don’t get discouraged. Just think of Layla missing her 2 front teeth. If she can pick herself up from that and be willing to try again, you can too. By the way, her 2 front teeth did grow in. And she has succeeded at everything she set her mind to. 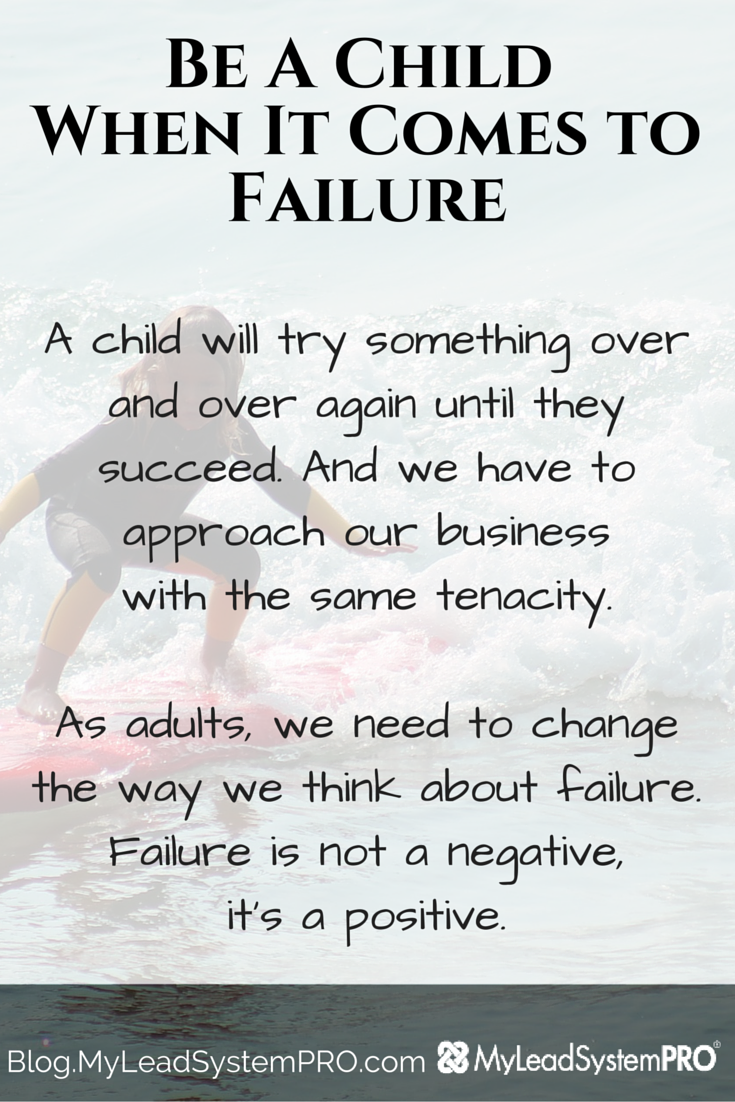 We all fail. We’ve all fallen down. It’s how quickly you pick yourself and dust yourself off that is the strong determinant of success. So, Be Like A Child When It Comes To Failure!

It was about 2 years ago when we came across My Lead System Pro. My husband, Steven, and I had been part-time network marketers for years but never really had any major success. Through our research we found that many leaders were apart of this system called MLSP. What we discovered after attending various training webinars and watching countless recorded training videos was that, we had been doing our businesses all-wrong.

Around June 2012, we made the decision to take massive action and start experimenting with several marketing strategies we learned from MLSP. Several months later, we were both in a position to quit our jobs using the video marketing strategies MLSP taught us. MLSP has taught us how to brand ourselves online, create our own products, generate 25-40+ leads a day and how to be effective leaders.

It’s been over a year now since we became full-time Internet marketers. It’s truly been a blessing to have been able to generate over 12,000+ leads, and thousands of online sales… We have seen major results with everything we touch using the “Attraction Marketing” strategies MLSP teaches. You can do this… we believe in you!