Providing Entrepreneurs with Innovative Solutions, Tools, and Trainings to Brand YOU and Take YOUR Business To the Next Level Since 2008
Menu
RISK FREE TRIAL
Home » MLSP News » MLSP Reviews & Results » DECEMBER MEMBER OF THE MONTH: Baxter Badger 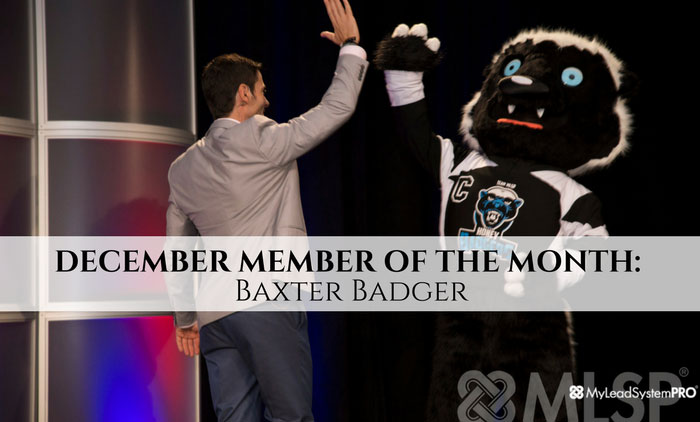 (WARNING: our in-house fearless honey badger, affiliate manager, and family member talks in the 3rd person… we aren’t 100% sure why, but this honey badger does what he wants… and we love him regardless… And YES he loves YOU, our MLSP family!)

Wow! Baxter can’t believe what an amazing year it has been with MLSP. He is so grateful to be writing this end-of-year blog post as the December 2016 MLSP Member of the Month! Baxter sends all of his love to the ENTIRE MLSP Community and Family because it is YOU that drives Baxter to work tirelessly 24/7 on the MLSP Vision & Mission! (and YES, Baxter loves what he does all day every day to support YOU and YOUR dreams!)

In case you don’t know Baxter, he is the resident MLSP mascot… also known as “Baxter Badger.” Baxter started off living a simple honey badger life. But Brian Fanale & MLSP found Baxter, saw the greatness that was sleeping inside of him, and then swooped him up for success years ago. Today you can find Baxter roaming Brian Fanale’s house while being laser-focused on MLSP’s VISION (honey badgers aren’t very shy about making themselves comfortable in someone else’s residence)… or attending live MLSP events, chatting it up on MLSP Facebook Lives, and relentlessly posting great content inside the Members ONLY Facebook group nearly every single day.

What an amazing year it has been to watch from a honey badger viewpoint — which is pretty low to the ground. Did you know honey badgers are only about 10 inches tall?! It gives Baxter an even greater perspective on things!

Where to even start? Baxter has learned so much from all of the amazing members of the MLSP community this year, and MLSP’s online community has grown exponentially! Our Facebook Fan Page alone started at around 45k likes this year, and has blasted off to over 100,000+… Wow! Baxter doesn’t even know how to count, but that sounds like a lot!

PLUS, did you know MLSP averages hundreds of dial-ins a day for our MLSP Daily Morning Wake Up Calls? That’s all because there are leaders like YOU who want to be inspired, and are ready take their next step toward greatness. One of Baxter’s favorite things is calling in during the morning calls, and listening to some of our amazing leaders like Diane Hochman, Steve Krivda, Adam Chandler, Mark Harbert, April Marie Tucker, Steven Rachel, Lisa Torres, Dustin Wisnowski, Ryan McMorris, Erin Birch, Ron Gelok, Keysha Bass, and Brian Fanale, and gosh the list goes on! Baxter knows 2017 is going to be even better! #gettingbetterandbetter is our motto after all!

To be honest, Baxter is kind of an exception in the honey badger community because he LOVES meeting new people. Baxter’s family is known to be a little solitary, so when he found MLSP, he was blown away with how strong and connected the MLSP family was! The year of 2016 has certainly proven this beyond a shadow of a doubt. For example when Baxter posts the daily welcome messages in the MLSP Facebook group, people are always welcoming, day in and day out. It doesn’t matter how many times you’ve seen Baxter’s ‘Honey Badger Welcome Dance!’ Every day the community welcomes new faces with as much enthusiasm as the next. There is so much strength within the MLSP community!

Even if Baxter has a bit of an advantage — honey badgers hold the Guinness Book of World Records title of “World's Most Fearless Creature” — he knows all of you are tapping into YOUR courage within to grow and become just as fearless. But remember, it’s not because fear doesn’t exist! Even MLSP’s most powerful leaders feel fear because without it, there’d be no need for courage or strength… and obviously you already know the MLSP leadership IS courage and strength across the board!

So pick up those notepads. Keep learning, keep growing, and keep adding value to YOUR audience, target market, and customers! Baxter can’t wait to see all of the amazing success stories, workshops, live events, invaluable content and trainings, and new leaders that emerge in 2017… and Baxter is looking forward to meeting YOU at one of the exciting upcoming LIVE MLSP events happening in 2017!

Baxter says, “THERE IS GREATNESS INSIDE OF YOU… YOU ARE THE ONE… HAPPY NEW YEAR!”