Providing Entrepreneurs with Innovative Solutions, Tools, and Trainings to Brand YOU and Take YOUR Business To the Next Level Since 2008
Menu
RISK FREE TRIAL
Home » MLSP News » MLSP Reviews & Results » FEBRUARY MEMBER OF THE MONTH: Antonio Starr 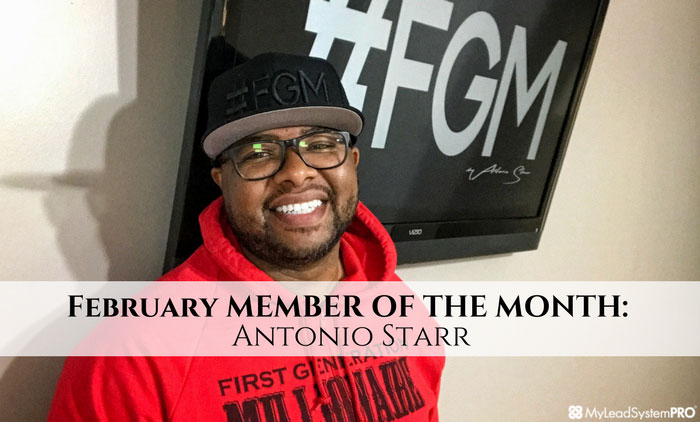 So… I’m checking my Facebook inbox and noticed a new message in my “other” folder. Typically, I am slow to check my other folder because it’s usually some network marketer slamming their company’s flyer in my face.

Well, today I felt immediately compelled to open up the other folder and see what was in store for me.  The message was time stamped Tuesday 7:33 pm and it read:

Hey Antonio:  This is Melanie with MLSP and I sent you an email yesterday, wanted to know if you received it and if you accepted.  Let me know if you didn't receive it and I'll resend it.

Immediately, I knew what the email was regarding!

You see, back in December 2016 my friend and the person who introduced me to MLSP said to me “Antonio I think you can eventually become Member Of The Month…”

Honestly, my head had been down working since I started my MLSP membership in mid-October 2016, so I hadn’t even researched Member Of The Month properly, but at the very moment, I wanted it!

Ok, back to the excitement around that inbox message…

The time stamp of me reading Melanie’s message was Wednesday 1:44 pm (over 18 hours after she sent the message). I subscribe to the adage that you must seize the opportunity of a lifetime during the lifetime of the opportunity, so I hurried to my email so I could accept!

The problem with that acceptance… I couldn’t find the freaking email!

Eventually, I found the email in my spam folder and humbly accepted the honor of being the MyLeadSystemPro February 2017 Member Of The Month after just 4 months into my MLSP membership.  Thankfully, my window of opportunity was still intact and I seized it.

Was that an intro or what?!?

Antonio Starr here and I am honored to be amongst the greats that have been featured Members Of The Month.  My story is a humble one (I’ve always wanted to say that).  I was raised in deep South Georgia where even though it was post-segregation it was still very much segregated down the racial and economic lines (still is actually).

My entire childhood was spent on our side of the tracks, spending most of our time with people who looked, thought and spoke like us.  It was all I knew, mainly because it was all that my family and the families on the other side of the tracks knew.

It wasn’t until my father enlisted in the United States Army that my life and perspective would be turned on its head.  In 1988, we moved to Fort Carson Colorado and the new Antonio was born.  The military forces you to acclimate fairly quickly with kids from all over the world and they expect you to get along or your parents would get in trouble.

It was in my military BRAT years that I learned next level communications skills.  Imagine a black kid from the deep south befriending a white kid from a fly over state who’d never met a black person before.  It was beautiful!

Skip to 1991 and duty sent us to Germany where would live amongst the locals.  This was the next level of my communication skills development.  One of my best friends was a Turkish kid who spoke very little English and I, even less German.  We made it work though.  Through this friend, I learned non-verbal communication skills.  We were eventually able to speak to each other with just facial and eye movements.  We connected spiritually.  I was almost kidnapped one night that we were hanging out at an arcade, so imagine me explaining that without speaking a word.  We’ll save that for another time though, lol.

Why did I go so in depth into my childhood?  It’s because that’s the only way I can explain why I’ve had so much success in MLM and in MLSP.  I learned how to communicate, connect with and influence a plethora of people at an early age.

Prior to January 2015, I knew nothing about network marketing aside from a few people who pitched me on a beverage company back in 2001.  I shot all of them down because of course, some wise person had already told me about those scams.

From January 2015 until now, I’ve had tremendous success on my very first MLM run. Mind you, I’m the kid who had to attend summer school in order to graduate high school with a 1.9 GPA (I think it was actually closer to a 1.8).  I attribute my scholastic underachievement on the fact that I spent a great deal of my time communicating with people even while the teacher was teaching.  On the other hand,  my MLM success is definitely in direct relation to the fact that I’d started to build connections and influence with my existing circle.

I am not the big time marketer guy (yet).  I look at people like the Lisa Torres’ and the Ray Higdon’s and the machines they’ve built with envy because I know that where they are is the next level for me.  BUT!  For now, I am playing to my strengths!

I do not have a gigantic list (yet).  My blog needs more work, but Antonio Starr has some pretty good influence in his forever growing circle and I will continue to nurture this gift while I develop in other areas.

Thanks to MLSP, I’ve been able to monetize my influence more than I've ever had in the past. This platform was a tremendous contributor to the success of my First Generation Millionaire clothing brand (www.firstgenerationmillionaires.com) that I launched in December 2016.  I meshed my influence with the MLSP platform and created a record-breaking debut!  I say that to say that MLSP will enhance any aspect of business, not just MLM.

Thanks to MLSP, I’ve been able to show people a glimpse of how my brain works through a system that is already built out and is plug and play ready.  I teach mindset mastery to my clients and business partners and MLSP makes it extremely easy.  Even something as simple as seeing my partners coming out of their shells to create Facebook Live content is really moving for me.

All I’ve ever wanted to do as an adult was to create real connections with people and to connect them to resources that will change their lives forever.  I must say that we’ve been pretty successful in doing just that. The best part is we are just getting started!

Thank you for your time and your vision.