Providing Entrepreneurs with Innovative Solutions, Tools, and Trainings to Brand YOU and Take YOUR Business To the Next Level Since 2008
Menu
RISK FREE TRIAL
Home » MLSP News » MLSP Reviews & Results » MLSP JULY MEMBER OF THE MONTH: Reginald Stinson 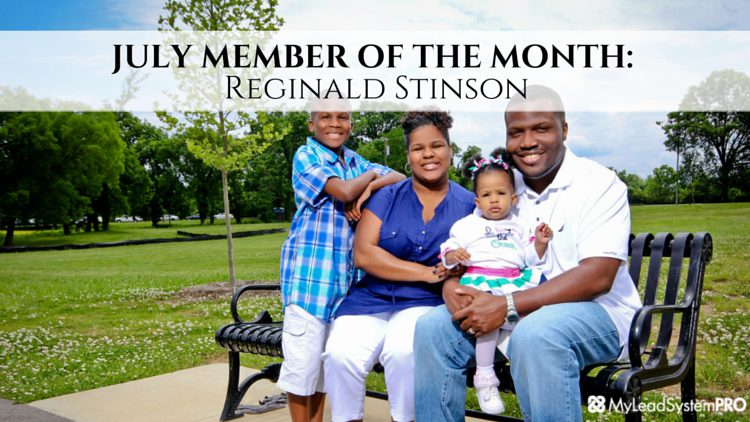 Born and raised in Birmingham, Alabama with what one would call “less than humble” beginnings, Reginald Stinson always knew that he had the ability to shape his direction and destiny for his life. Raised with his brother and a mom who instilled strong core values, he was always a independent, determined and a smart leader. During his younger years, Reginald never thought of himself as poor, but he knew there was more that he wanted for himself. He made choices that would shape the type of business owner, entrepreneur he is today.

During his teenage years, Reginald strayed from the core values that his mother taught him and he found himself in trouble. These experiences shaped his mindset and he realized that he wanted to do things differently to become successful. He knew that the expected path of college and a “good job” wasn’t for him. He received his GED and went on to college, wanting to walk across a stage for his mom. Little did they know, he would walk on stage impacting lives of others in a more positive and tangible way. Reginald was destined to break the generational curse on his family of having “less than” and create a legacy of having the lifestyle they deserved and desired. Through his determination to prove that he did not have to be a statistic, or a product of his environment, he would encourage others to believe that they did not have to settle for what is the “expected path” but strive higher to have more.

Married at an early age and in college, Reginald responded to an ad in the newspaper which would introduce him to a new, self-directed path – entrepreneurship through Network Marketing. Reginald knew instantly that this was the way he would change his life. He quickly realized that this career path held no limits, his success would be based on his own terms. Reginald submerged himself in all that the industry has to offer. He knew that this was the way to achieve the lifestyle he deserved and desired.

While in college, between 2005 – 2006, he was exposed to and took the first step in the direction of entrepreneurship within the Network Marketing Industry. Reginald was hooked on the every aspect of this career path.

Reginald has become the “Hope Giver”. Compassionately training his success-line of over 14,000+ people. He has personally introduced and trained over 1000 affiliates in his current company – producing over 8, 6-figure earners. Through his training style, he gives hope that You can have the lifestyle you desire on your own terms. Regardless where you come from, you can shape your own future, without limitations through the Network Marketing Industry.

Reginald is a dedicated husband and father raising his 3 children with his wife of 10 years. He credits his professional accomplishments and shaping the future for his family to this industry. He is determined to give value to the Network Marketing Industry and anyone who strives to change the quality of their life.

Previous Post
[Success Story Saturday] “I’m On the Leaderboards With the Top Dogs”
Next Post
How Self Aware are you?