Providing Entrepreneurs with Innovative Solutions, Tools, and Trainings to Brand YOU and Take YOUR Business To the Next Level Since 2008
Menu
RISK FREE TRIAL
Home » MLSP News » MLSP Week-in-Review: October 30, 2017 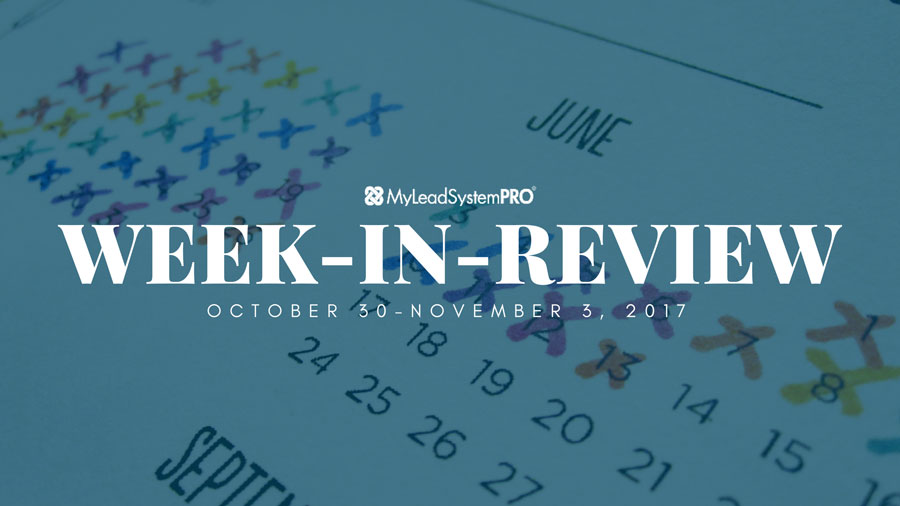 The MLSP leaders were on fire this week bringing tons of value to the community.

Every single week day they bring their secrets of success to the table on morning Wake Up Calls, and Facebook LIVE broadcasts. They give strategies and clues that you can carry with you to create the success that you're after with your own home business.

We've collected them all, and put them in one  spot so that you can get all of this great content simple and easy, incase you missed anything through the week!

‘The One Crucial Step To Take To Avoid Failure'!

Bert Bledsoe wanted something bigger with his life. A life with no limits. Like many of us, working a 9 to 5 job didn't fit that life of freedom that he was seeking.

So when he joined MLSP, and started learning how to attract prospects for his business, he got to work and made it happen. This newly earned financial and lifestyle success allowed Bert to retire his wife, pick up and move to his dream home with a 5-acre property ranch. Goat Village (previously in the backyard) has officially expanded.

On Monday's Wake Up Call, Bert revealed what he has learned is the #1 crucial thing you must do to avoid failure.

Here's what you'll find out from Monday's ‘Wake Up Call' with Bert:

Bert jumped over to the MLSP Fan Page and did a LIVE broadcast from inside his home (wait til you see his kitchen!) He jumped further into what you need to know about avoiding failure! This is a LIVE that everyone feeling discouraged or stuck needs to see. Heck even if you're not, this will get you pumped up!

‘Put Peace In. Get Profit Out!'

Ryan McMorris is doing it with his business. He's a full-time biz owner, at home, with his young family. As an aspiring professional baseball player, Ryan took that heart and applied it to growing his business. The results were that he got exceptionally good, very fast.

He simply just did the things that it took to build his audience consistently. Never worried about getting it perfect (because it never will be.) This willingness to take action, and keep improving is the factor that created such fast and sure success for this go-getter.

On Tuesday Ryan goes deep into what it takes to get into profit.

On the Tuesday Wake Up Call Ryan dove into:

After the Wake Up Call, Ryan graciously gave even more of his time to the community over on the MLSP Fan Page in a LIVE broadcast. As he dove deeper into the subjects that he tackled on the WUC, he was able to start bringing clarity to many people who watch live.

Which is why if you missed it, you should watch that live now below!

Hit Play to Watch the Tuesday FB Live Below…

Mark Harbert is one of the most determined people in our industry to create success stories other than his own. This guy gives immense value every time he speaks…whether it's on a Wednesday Webinar training…or on a 20 minute wake up call. He shares everything that he knows with no thought of keeping his best stuff to himself. He lives in this abundance mindset.

With plenty of struggle in the beginning of his online career, this guy learned what it means to invest in yourself. On Wednesday's Wake Up Call, Mark revealed the greatest investment that you can make starting TODAY!

After the call Mark beamed in to the MLSP community from his home office over on the MLSP Facebook page. He drilled down more on the best way to invest in YOU to supercharge your skills, and become increasingly more valuable to the marketplace.

You'll want to make sure to watch this LIVE broadcast and carry this into not just the next week in your business… but the rest of your life!

Our newest L6 leaders are a power couple that continuously gives value to our company, that helps YOU get to the results that you're looking for. In fact, doing that with a very effective Twitter formula is the biggest reason why Todd and Leah were able to get to L6 leadership very fast.

They've created immense value in the marketplace, and have therefore built massive trust. This causes people to want to follow you, buy from you, and join you.

On Thursday's WUC, Todd and Leah dove into the 4 ways that you can start building that same kind of trust and rapport among YOUR audience.

Todd and Leah are never shy about giving EVERYTHING to this community, and they did exactly that when they did their Facebook LIVE from home to the MLSP community.

If you really want to start building trust with your audience, and do it in a very fast time, then the replay of their FB LIVE broadcast from Thursday is essential viewing for you!

‘Do You Have Evidence?'

If you're in this community, and you've got a team that's killing it…you owe a lot of thanks to Keysha Bass. This is the awesome lady who gets on every Monday Night @ 8PM EST to get the new MLSP members quickly on their way to success.

Keysha is now living the dream, working from home, and that's because she jumped into MLSP and just started doing the work. She did what was required of her to do, and did it in a fairly fast amount of time.

You'll want to listen to every word of this important Wake Up Call…because it very well may be the thing that completely changes your entire business!

Keysha had plenty more to say on her topic on Friday. So she immediately fired up her LIVE broadcast over on the MLSP Facebook page, and let loose.

One thing that you'll see about Keysha is that she's able to tear the complicated down, and make it simple to digest. All so that you can put things into practice immediately.

You can watch that in action on the Facebook LIVE replay below!

MLSP Exists to Make Success Possible for YOU!

The one thing that's important to understand is that MLSP is a community. You'll be hard-pressed to find another community where not only the leaders inside give SO MUCH value, but the members as well.

From the newest to the most seasoned, the community thrives every single week. Proof of that is with the success stories shared each week. Nearly everyone thanks not just MLSP but the community that's helped them reach their latest results.

You can see Proof of that in the latest Success Story Saturday Post below!