Providing Entrepreneurs with Innovative Solutions, Tools, and Trainings to Brand YOU and Take YOUR Business To the Next Level Since 2008
Menu
RISK FREE TRIAL
Home » MLSP News » MLSP Week-in-Review: October 9, 2017 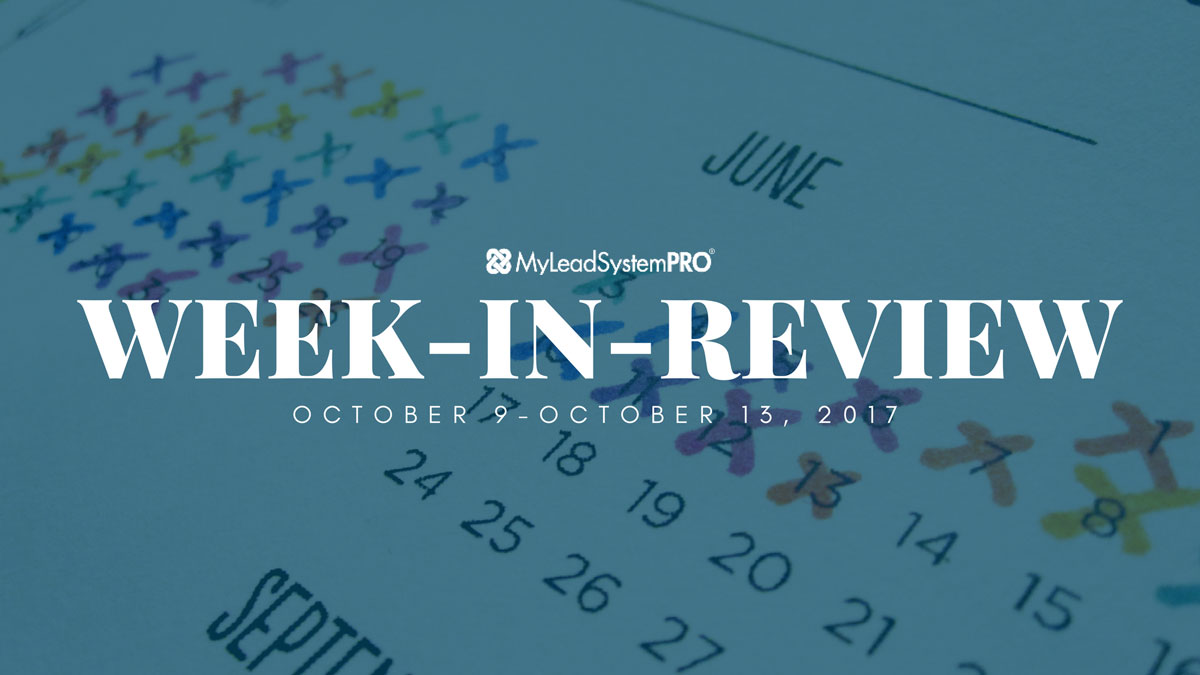 Our leaders have been busy pumping out well thought out content throughout the week meant to help YOU drive your business forward.

If you  missed any of this content, then you're putting yourself at a disadvantage. Your business is too important not to get all of the golden nuggets dropped by our leaders every single weekday.

But don't worry if you missed anything this week, because we've got it all here for you now!

Check out all the amazingly valuable content from MLSP's leader throughout the week!

‘What is Better Than Chicken Soup?'

When Bert Bledsoe came into MLSP he was working a full-time job, with just a dream. The same one  that YOU are probably dreaming about as you read this. Working full-time from home…as well as making it possible for his wife to work full-time from home.

Both of those things have come true, as well as some even bigger dreams that Bert picked up along the way! In this Wake Up Call Bert talks about how with just a couple of bucks, he was able to jump into something that completely changed his life!

On Monday's ‘Wake Up Call' Bert talked about:

Bert Bledsoe moseyed on over to the Facebook LIVE broadcast following his WUC and displayed just how multi-talented he is. He also proved that with just an hour a day, you can change your business and your life forever! You'll love this!

This guy will fire you up, so you'll want to make sure to catch this replay if you didn't catch it live (or watch it again even if you did!)

If you're trying to succeed with a home business, then Steve Krivda is the guy that you want on your side. You want to take in as much of his message as you can, whenever you can, because this is a dude that's all in for YOUR success through a winning mindset and effective Attraction Marketing!

He's got a knack for waking people up, by helping you look inside and digging deep.

This week Steve is revealing his ‘3 Steps to Success' which is golden for anybody just starting, struggling, or just wanting to take things to the next level in your business!

Check out everything Steve had to say on the Tuesday Wake Up Call:

After the Wake Up Call, Steve fired up his Facebook LIVE broadcast to the community. He dove further into the points he was making on the call, and also was able to respond to those who were watching live.

When you watch this replay of Steve's Facebook LIVE, you'll have no choice but to reflect into some of the things that are stopping you from being the success story you're meant to be, and Steve shows how to turn that around!

‘How To Plan Your Way to Success'!

Lisa Torres struggled for 18 years, and made a whole $20 during that time. That's right, only twenty bucks in almost two decades.

But if there's one thing about this tough girl from the Bronx, it's that there is NO quit in her! She was destined to make it, come hell or high water. And once everything clicked…she absolutely EXPLODED her business and hasn't slowed down one bit since.

This is the gal who tells it like it is. So when you get on these Wake Up Calls, or listen to the replay like you're about to do, you know that every word coming from her mouth is the straight-to-the-point truth!

Lisa hopped on the Facebook LIVE and she had a friend along with her. A cute friend indeed. She dove deeper into the stories she told on the call, and revealed how to PLAN your way to achieving goals, even if they far-reaching goals.

On this Facebook LIVE you'll also get to take a tour of Lisa Torres' brand new house that she had built from scratch. This was a powerful Facebook LIVE that will show you what's possible if you just have unshakable tenacity!

Leah Getts and her husband Todd absolutely stormed onto the scene at MLSP. They had a goal to get Todd home full-time, so that they could raise their son as a family… that would never see daycare and never have a kid who would only get to see dad on nights and weekends.

They took that dream and vision and ran with it, achieving their goal of bringing Todd home from a six-figure corporate position in a relatively short time. It was all because of hard work, with a social media marketing strategy that worked like gangbusters.

Along the way, they've helped and touched so many other people's lives who are following their path to success.

On Thursday's Wake Up Call, Leah shows YOU how you can crush your goals in 3 simple steps… just like her and Todd were able to do!

After the Wake Up Call Leah brought her husband Todd into the conversation to go through the 3 Steps  of crushing your goals in even more details.

If you've got big goals like Todd and Leah had, then this is essential to watch because though these two have been on fire, and they're still in the midst of this storm of success of theirs right now.

They're still relentlessly going after their goals, and when someone who is achieving what you want to  RIGHT NOW… it's important to soak in everything you can from them when they spill the beans!

‘What Is Your Action Plan?'

Mark Harbert is a huge name in this industry, and for one very good reason. This guy delivers massive value to the community on a continuous basis. Whatever Mark learns and has success with, he always brings back around to the community and teaches these methods.

He's been single handily responsible for tons of success stories by sharing his strategies on internet marketing, which has had a very strong emphasis on marketing with videos.

One thing Mark knows how to do is create a plan, and then TAKE ACTION on that plan to create success. On Friday's MLSP Wake Up Call, he closed out the week showing exactly how YOU can do that as well… without getting bogged down on all the details you really don't need to have before you start!

Hit the Play Button Below to Hear Mark's Powerful WUC…

Mark dove right into the powerful points he was going over on the MLSP Facebook page as soon as he was done with the WUC.

However he brought up a critical topic he didn't cover on the WUC that keeps so many people from achieving success. It's almost become an epidemic, especially in the home business industry. Mark will show you how to bust through this common obstacle, so that you can skyrocket your way to success much like he and many of the people he has coached has done!

Why The MLSP Wake Up Calls and FB LIVES Are So Important!

One of the not-so-subtle clues that our leaders always seem to leave is how important the daily MLSP Wake-Up-Call was to their success. Almost each and everyone has said the exact same thing.

If you want to achieve the success that the leaders you admire in this industry have achieved, then doesn't it make sense to do what they do, and listen to these calls everyday.

Of course you can always catch up on the ones you miss here every week in the MLSP Week-in-Review!

Our members are killing it! They share their success stories inside the Private MLSP Facebook group throughout the week, and we leak them out to you on the Success Story Saturday post!

==> Click Here to See the Success Stories of the Past Week Inside MLSP!

Previous Post
[Success Story Saturday] “My Life Became a Prime Case Study! This is the fairy tale I have always read about”
Next Post
OCTOBER MEMBER OF THE MONTH: Linda Bomba