Providing Entrepreneurs with Innovative Solutions, Tools, and Trainings to Brand YOU and Take YOUR Business To the Next Level Since 2008
Menu
RISK FREE TRIAL
Home » MLSP News » MLSP Week-in-Review: November 6, 2017 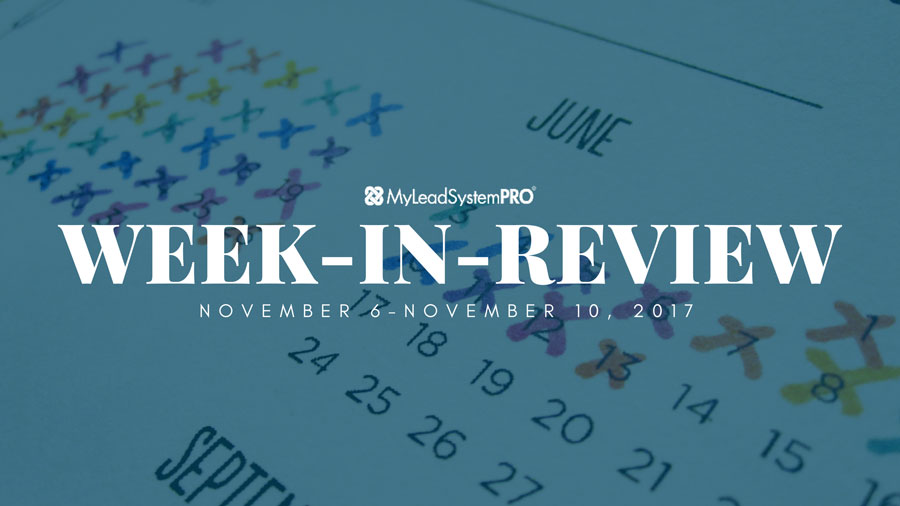 The MLSP leaders don't stop bringing the value for you each and every single day at MLSP!

Every weekday morning at 11AM EST they're up and ready to help YOU take on the world. This week of course was no different and they laid out some brilliant content to help you burst forward with your business.

We've put it all in one place so if you missed anything, you can catch it all now. Which of course will get you ready to take on the world through the next week!

Check out all the life-changing value the MLSP leaders dropped throughout this past week!

‘Survival of the Fittest'!

Todd and Leah Getts are top affiliate members in MLSP and riding high at L6! These two are prime examples of what happens when you roll up your sleeves and do the work. They created and followed a highly effective Twitter strategy that quickly took them from struggling online, to getting endless leads, traffic, sign-ups, and sales!

Now they're living the dream, with Todd now retired from a healthy six-figure business to build an empire from home. Once again, they gave up another key component of making that happen on Monday's Wake Up Call!

On Monday's ‘Wake Up Call' Todd & Leah Getts talked about:

The power couple immediately fired up Facebook LIVE from their home after the Wake Up Call, and dove deeper into what it takes to survive the ever evolving world of online marketing!

If you want to bulletproof your business, and be ready for absolutely any threat that comes your way, then make sure to watch this LIVE below!

Watch this FB Live HERE! There were some technical difficulties this week with FB Live. Sorry for the inconvenience.

Diane Hochman is MLSP's one and only L7 leader. That's the highest level ever reached.

She's been doing some major traveling for 3 weeks, cruising the Panama Canal, and Central and South America… and all over the U.S. to hang with people she's met along while building her online business.

The reason she gets to do that is not because she's lucky. Nobody gave this life to Diane. She built this life for herself from scratch. Diane created the skills that it takes to be able to now have the complete freedom to basically do whatever she wants when she wants…all because she was able to master attraction marketing!

On the Tuesday Wake Up Call Diane dove into:

After Diane's Wake Up Call, Brian Fanale hit the switch and go LIVE on Facebook to dig deeper into why the concept that Diane covered is so vital to building your brand.

Brian talked about why YOU are not only already ENOUGH, but why you are powerful beyond even your own imagination right now, and how to get to the life-changing point where YOU believe it as well.

‘The Most Precious Resource'!

Ryan Cody McMorris is an L5 rock star who refused to quit. He came in knowing nothing and surpassed that whole mindset of not knowing by going in head first to a couple of strategies. Ryan started blasting out some Facebook LIVES, and began to quickly build an audience.

This guy is an athlete at heart, and even if you're not an athlete you can still bring the champion mindset of Do Whatever It Takes to your business – and START WINNING just like he's been able to do.

Or as we like to say at MLSP…you can Start Getting Better and Better Everyday!

He also gave some insight on some of the cool stuff going on here at MLSP that you'll be interested to hear about!

Steven is ½ of the Steven & Lanacia team. These two got exceptionally well at a few concepts, including being video marketing and Facebook LIVE. Is it Steven Lanacia or Steven Speilberg? Sometimes it's tough to tell the difference with this guy.

This dude is simply doing it day after day. He works hard to constantly build his audience, and engage with them…constantly motivating and giving people exactly what they need to build their own dream life. The Rachel's truly care about their tribe and the industry as whole and it shows every single day, in everything they do.

You'll see exactly that in action on Thursday's MLSP Wake Up Call!

Once again CEO Brian Fanale took the reigns and hopped over to Facebook Live! He loved the message that Steve put out on his WUC, and even expanded on it further!

L5 Keysha Bass is responsible for countless success stories inside MLSP. Why? Because every single Monday Night @ 8PM EST on the MLSP Orientation Call she takes new members through a thorough walk-thru of the MLSP back-office so they can get started with their business from the get-go!

So if you are or become a member of MLSP and you bring someone into the system, you can direct them to the Monday webinar, and know that they're in good hands.

Keysha built her business from the ground up inside MLSP, and is now absolutely living the dream!

Why the MLSP Wake Up Call is Vital to Your Success?

There's one thing that we all have to battle and overcome in our pursuit of success and happiness.

That one thing is our mindset.

All the tools, all the training become absolutely useless if you don't have the mindset that stirs action. Your mindset is what helps you get up when you get knocked down (even if it's for years and years!)

The MLSP Wake Up Call is here for you every single day to get going with that type of mindset. All from leaders who are living the life that you want…and still working at it every single day.

This is priceless, and 99.9% of the leaders who come through MLSP, and go on to achieve success point to the fact that the Wake Up Call was a major factor in their success.

What type of success can you quickly achieve once you've got the right mindset?

We've Posted the Multiple Wins from Members of Just the Past Week Alone on the MLSP Success Story Post Saturday Post! ==> Click Here to See Them All Here!