Providing Entrepreneurs with Innovative Solutions, Tools, and Trainings to Brand YOU and Take YOUR Business To the Next Level Since 2008
Menu
RISK FREE TRIAL
Home » MLSP News » MLSP Week-in-Review: December 3, 2018 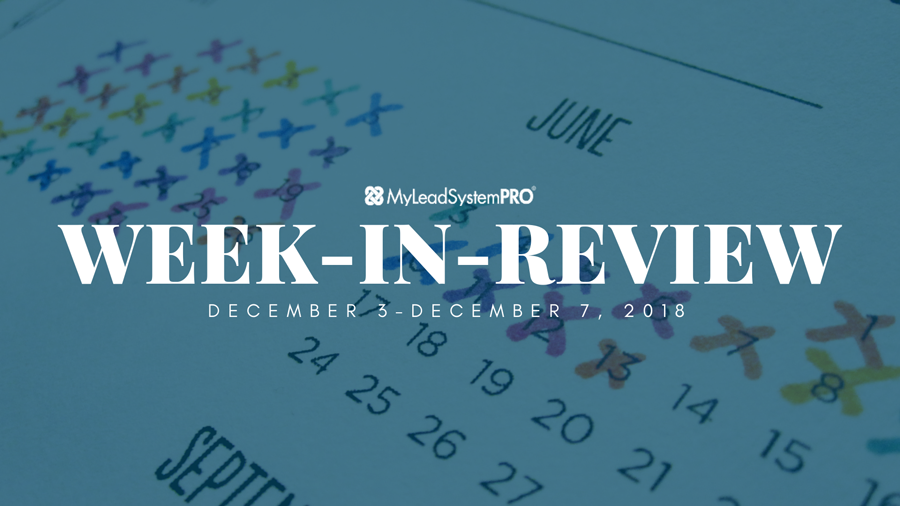 Ever notice that strategies and tactics dominate the thoughts of those who want to create success in their businesses and lives?

However one of the critical things that most miss… is that true success comes first from inside. Your mind is the key to you becoming successful. And nobody understands that better than the six, seven, and eight figure leaders who came on this week to share the things they’ve learned along the way.

They had to rewire their minds for success along the way, to get them through the barriers, pitfalls, and limiting beliefs that WILL show themselves along the way on YOUR journey.

Now is your chance to find out how to navigate your way through them.

‘Is the Fear of Leadership Holding You Back?'

It’s a fear that many don’t think about before starting a home business. Becoming a leader is vital to achieving success. But are YOU afraid of stepping into that role?

If so you’re certainly not alone. And it’s a fear that holds tons of people back, and stifles their chances for success.

You wouldn’t think it by watching her now, but Erin Birch got paralyzed with this same fear when she began. How’d she overcome it? How did she go on to become an authority on social media marketing and a six-figure earner in her very first year online?

You’ll want to listen to every word of her Wake Up Call from Monday to find out!

On Monday's ‘Wake Up Call' Erin went over:

Erin was anxious to go LIVE from the MLSP Facebook Page, and go even deeper into this topic. She shows YOU how you can get over your fear of leadership, and become a force in your industry!

‘How to Build Your Business by Starting Strong and Finishing Strong'

If anyone knows what it takes to build a strong business online it’s L7 leaders Todd & Leah Getts!

They used an insanely effective Twitter strategy to blast to the top, and took a ton of people with them along the way.

But like any business owners who have had the type of success that they’ve had, they also know the pitfalls that you can run into at the points between starting your business from scratch, and growing your business to six-figures and beyond.

On the Tuesday Wake Up Call Todd & Leah talked over:

Of course Todd & Leah are always willing to give back to the MLSP community, and they proved that once again when they went LIVE from the MLSP FB Page! See what they said about what it takes for you to build a rock-solid business.

‘What Is It Costing You?'

Are you getting the results in business and in life that you want? Or are your own limiting thoughts holding you back? What is it that’s holding you back right now? What’s the belief system running through your head that’s not allowing you to move forward in your life?

Before starting the platform that’s shown tens of thousands of people how to use attraction marketing to attain their dream life, even MLSP CEO Brian Fanale was plagued with these limiting beliefs that held him back for years.

He was obviously able to move forward and learn to defang these thoughts allowing him to go on to create an $8-Figure business.

More importantly Brian knows that YOU can do the same!

In this critical Wake Up Call from Wednesday, Brian shared what it takes and what he did! It’s time for YOU to breakthrough!

Nobody is more excited to give massive value to the MLSP community (and beyond!) than Brian Fanale! That’s exactly what he did when he went LIVE from the MLSP Facebook Page on Wednesday to go further into this vital topic.

It’s a MUST-SEE for so many…maybe even YOU!

‘Closing with a Bonus!'

If you’re not closing people into your business, then you’re not making any money. If you’re not getting sales and sign-ups do you really have a business at all?

L5 Steve Krivda just finished up two weeks of training on closing to the MLSP community. And then, to top it off, he got on the MLSP Wake Up Call on Thursday to go over even more stuff that he hadn’t even covered on those trainings. Pure value!

If you’re not closing, if you fear closing, if you want to become the marketer who can bring people into your business, then you need to listen to the replay below immediately!

Steve Krivda is always looking to add tons of value. He did just that when he moved the conversation over to the MLSP Facebook Page and dug deeper into this lesson to teach YOU to become a highly-effective closer (even if you’re afraid to pick up the phone right now!)

Which of These Takeaways Will You Carry Into 2019 to Make It YOUR Best Year Ever?

You just witnessed six, seven, and eight figure earners diving deep, to share the things they learned along their own journeys.

Which of the points hit a nerve with you the most? What can you commit to carrying with you over the next week, and into 2019 to make the best year you’ve ever had?

Your time is NOW!