Providing Entrepreneurs with Innovative Solutions, Tools, and Trainings to Brand YOU and Take YOUR Business To the Next Level Since 2008
Menu
RISK FREE TRIAL
Home » MLSP News » MLSP Week-in-Review: April 9, 2018 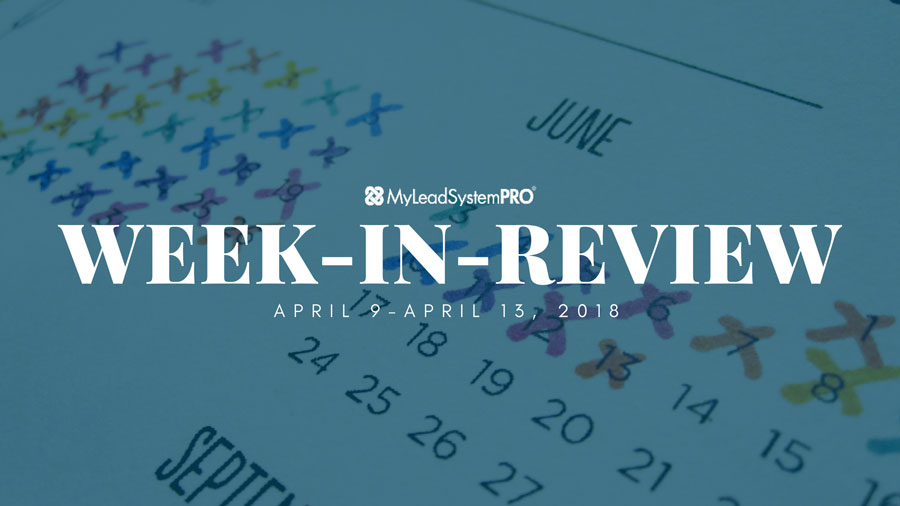 Over the past week, just like every single week, the leaders at MLSP have come through to give you their best stuff. For free!

Imagine that. Six, seven, and eight figure earners just laying out their biggest mindset secrets and strategies, so that YOU can achieve what they have.

That’s how we do things here at MLSP, and we’ve got amazing who feel the same about bringing you value! The live to give so that YOU can become the same success story that they’ve become!

Check out all the amazing value the MLSP  leaders revealed throughout the week!

‘A Light At The End Of the Tunnel!'

When most people go into starting a home business, they aren’t told all the truth’s that comes along with that decision. You’re shown vacations, cruises, fancy cars, big homes. Those are the results that are absolutely possible.

But most won’t show you the struggles you must go through to get there. They don’t give you the realistic view.

Todd and Leah Getts had the realistic struggle as well. With an effective Twitter Strategy that’s helped bring them to six-figures, early retirement, and a highly automated business…they never forget that struggle.

On Monday they got very real about what most will face (you might be facing it too now). More importantly they showed how to see the light at the end of the tunnel during that struggle!

On Monday's ‘Wake Up Call' Todd & Leah talked about:

Once the Getts finished up their important Wake Up Call…MLSP co-founder and CEO Brian Fanale went LIVE on Facebook to dive deeper into this topic that everyone needs to hear…and see what happens on the other side!

When we start our entrepreneur journey we often begin from the wrong place. Worse, most never even get to the right place. The right things that they should be focusing on.

Marketing strategies are one thing. The foundation…the YOU…behind those strategies is what’s really going to make you successful. If you’re serious about your business, then you’ll go ALL IN on something.

Steven Rachel explained on Tuesday why that something should be YOU!!

On the Tuesday Wake Up Call Steven dove into:

Once Steven was done with his WUC, he hopped on over to the MLSP Facebook Page to go LIVE on his topic of ‘Going All In On YOU!’ This is an important topic, and the faster you take it all in, the more chance you have of success!

‘A Future Meeting with the Future YOU!'

Who is the future you? One of the things that you must understand is that it’s 100% up to YOU!

Your future you is the person that you start creating TODAY! And the starting point of that creation must come not from outside, but from inside.

Most people get this completely backwards. Yes understanding Attraction Marketing, and the different marketing strategies is vital…but success doesn’t necessarily come from strategies.

Your future you will reflect that one way or another. If you get what Brian Fanale shared on his Wake Up Call on Wednesday, “future YOU” will be the person that you want to be.

In his usual way, Brian did an exceptionally powerful Wake Up Call on Wednesday that you MUST hear!

This message is crucial. Brian went straight over and went LIVE so he could dig even deeper and reveal this important topic to even more people!

You’ll want to make sure to watch this and take it all in to learn the secrets of becoming the future you that you want to be!

There’s a secret to why Mark Harbert has been able to become both the video marketing strategy king…as well as a social media master!

It’s the same reason Mark was able to go from $7 in his Paypal account to 5 figures a month in 90 day (and NEVER look back since!)

He explained exactly what taking Massive Action looks like during his Wake UP Call from Thursday!!

Mark is a teacher and a coach through and through. During his Facebook LIVE that followed his Wake UP Call, he switched gears just a little bit and gave a  few tips on how YOU can get your day started with momentum EVERYDAY

You’ll definitely want to make sure you watch this replay if you missed it on Thursday!

‘The Importance of a Mastermind Team!'

One of the most powerful things that you’ll ever do for your business is to create a mastermind team.

Lisa Torres struggled for nearly 2 decades (and struggled bad!) before she was able to become highly effective on social media.

After recent admitted lack of motivation…she realized she needed the type of people who could push her forward. Who she could bounce ideas off of. So she started a Mastermind Team.

ON Friday’s WUC podcast Lisa goes into the step you must take if you want to build your own mastermind team (and you should!)

Lisa is a giver. She’s a great teacher that YOU should most certainly see in action as much as possible.

She was excited to go LIVE from Facebook after her Wake Up Call…and go further into the things that will help you create the mastermind that will DRIVE your business FORWARD!!

The Mindset Secrets Above Will Change Your LIFE, But Only If…

You know the answer already. You’ve got to take the mindset secrets shared with you by six, seven, and eight figure earners to practical use in your life!

When you put what you’ve just learned into action daily in your life, it changes everything!

Here’s PROOF of That from Just This Past Week Inside MLSP!