Providing Entrepreneurs with Innovative Solutions, Tools, and Trainings to Brand YOU and Take YOUR Business To the Next Level Since 2008
Menu
RISK FREE TRIAL
Home » MLSP News » MLSP Reviews & Results » SEPTEMBER Member Of The Month: Sherri Brown 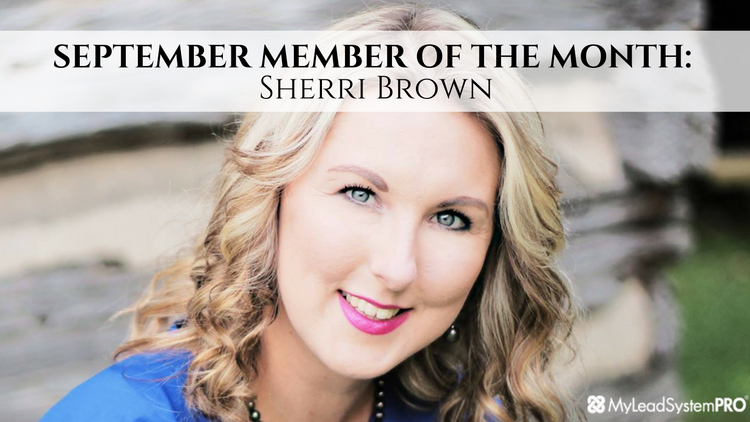 First of all, thank you so much to Brian, Ed, Ray, Norbert and everyone else at MLSP! When I got the email that I was selected as Member of the Month I cannot explain the excitement that came over me and if it weren't for everyone here, it never would have happened. Especially considering the amazing amount of truly talented people within the community. From the bottom of my heart, thank you for everything you do for so many of us around the world!!

As for my story, I pretty much grew up in Adamsville, a small town in Southwest Tennessee with one red light. If you blinked going by, you probably would have missed it. Funny but true. I had a typical upbringing and was an athlete growing up. I always considered myself good at a lot of things, but never great at anything. I'm sure some of you can relate to that. I come from a large family and was the youngest of six kids until my little brother Ethan came along when I was in college. Apparently I didn't give my family a hard enough time so they felt they needed to replace me. (totally a joke)

Growing up, I have my mother to thank for always pushing me and instilling in me to never settle! Never rely on anyone or anything but to always be independent and follow my dreams, no matter what.

After high school, I did was most typical kids do… I went to college. I ended up getting a tennis scholarship at a small, private school in McKenzie, TN. Bethel College (now Bethel University) is where I called home for about 7 years. I played tennis, cheered, was a member of a sorority and other clubs on campus while getting my bachelors degree in Biology and after, even went on to get my MBA as well.

During my 5th year, I ended up getting hired on doing wireless sales at a local store. I had an amazing boss, Melissa Chandler, who not only took me under her wing but taught me so much about sales, what it means to have a great work ethic and to never let excuses keep you from moving forward. Although there were times I wasn't so happy with her (like the fact that unless you were literally in the hospital, you were at work, lol) looking back she had a profound impact on my journey and I'm forever grateful for her.

So the majority of my twenty's were spent working in the wireless industry and I even tried my hand at banking for a few years as I became the assistant branch manager for a short period of time before moving back to my hometown (which I NEVER thought I would do).

After getting married in 2010 I was introduced to Network Marketing while at a baseball game. I didn't really have many expectations but figured “how hard can it be?” I've been in sales for years so what real difference is there? WOW!!! I was so wrong and my expectations were so off. Although I made some sales and built up a small team, I really had no clue what I was doing so I didn't make much of a profit.

Before I got pregnant in 2012, I decided to go back to school due to the long hours I was working in retail. I knew I didn't want to have to work weekends and holidays when I became a mom, so I decided to go back and take more courses so I could use my Biology degree and become a teacher. Well…. after finishing up those classes I couldn't find a job and the best I could get was subbing in the school system for $50/day and I did that until December of 2012.

After my daughter was born, I decided to be a stay at home mom. Although I was still with a MLM, I didn't do a ton with it but had some parties here and there. We then ended up moving to North, AL for two years while my husband finished up his college degree and it was being there with no family or friends that I decided I wanted something for myself without sacrificing time away from my little girl.

Only this time, I decided I was going to go online and build a business. I mean, there are billions of people on social media so if others could do it, I could too. Needless to say, my first four years in the network marketing industry were tough. I did what most others do, go to facebook and immediately start pitching! Now, I did get customers and grow a small team but it was never through any of my marketing.

In July, 2015 I called my sister up and was so excited. I immediately asked, “What do you think of my facebook posts?” which she replied, “To be honest Sherri, the only reason I haven't unfriended you is because you're my sister. You're a spammer!” Needless to say, although it was a sucker punch to my ego, I knew if she thought that, so did others.

They say when the student is ready, the teacher will appear and that's when I decided if I was going to create any type of success, I needed to figure out what the successful did differently. That's when I came across Ray Higdon in my newsfeed and I immediately was drawn to him. I not only started listening to him but I started implementing what he said. I resisted some things due to my complete lack of being “techy” so terms like “list building, lead magnet, blog, funnel, etc” made my head spin. However, I knew in order to grow, I was going to have to figure some things out.

As I was listening to one of Ray's podcasts one day, I heard him mention MLSP and I was like “hmmm…. what is this thing?” When I got home, I went to the link and signed up for my 10 day trial. I mean, I had already spent 4 years spending more than I made, roaming around clueless, turning WAY more people off than on and if this was going to help me in the slightest way, I'd be silly not to give it a shot.

I started my trial at the end of October, 2015 and I was immediately blown away!!! THIS WAS THE MISSING LINK!! Although there were so many terms that were foreign to me, I took action and I was determined to learn all that I could.

I can honestly say that in less than a year of consistent action, I went from being a total spammer, having major shiny object syndrome, people running from me, people ignoring me, having no clue about blogs or marketing to having a solid marketing strategy, I've now written over 100 blog articles, I'm doing videos, I'm WALKING THE STAGE, and now Member of the Month! Because of MLSP, I went from struggling to get signups to 18 in ONE WEEK (THAT is the power of coaching!!!). What's also pretty cool is this month alone I will have more than doubled the income I made working full-time at a bank (back in the day) and I'm home with my little girl.

I think my biggest win through all of my struggles was the fact that I went from a girl who had no clue what I wanted to do in life to finding my passion! That passion is cutting the learning curve of all those out there who have a dream but no clue how to make it a reality. That passion is inspiring others to NEVER give up on themselves because no matter what, THEY MATTER!!

I want to leave you with a few tips that have served me well…
1) Make a decision that you will do this DESPITE all the stuff life with throw at you
2) Step it up and mess it up ~Nadya Melton
3) Understand that money = the amount of value you put into the marketplace + the amount of eyeballs you're getting on what you have to offer ~Ray Higdon
4) Trust in the journey and stay consistent, even when you aren't seeing results. Your biggest breakthroughs will come after your biggest breakdowns.
5) Hire a coach or mentor!! Having one can drastically cut your learning curve! Now go out there and LIVE THE LIFE YOU DESERVE!!!