Providing Entrepreneurs with Innovative Solutions, Tools, and Trainings to Brand YOU and Take YOUR Business To the Next Level Since 2008
Menu
RISK FREE TRIAL
Home » MLSP News » MLSP Reviews & Results » [Success Story Saturday] “87 Leads and 62 Likes to My New Fan Page” 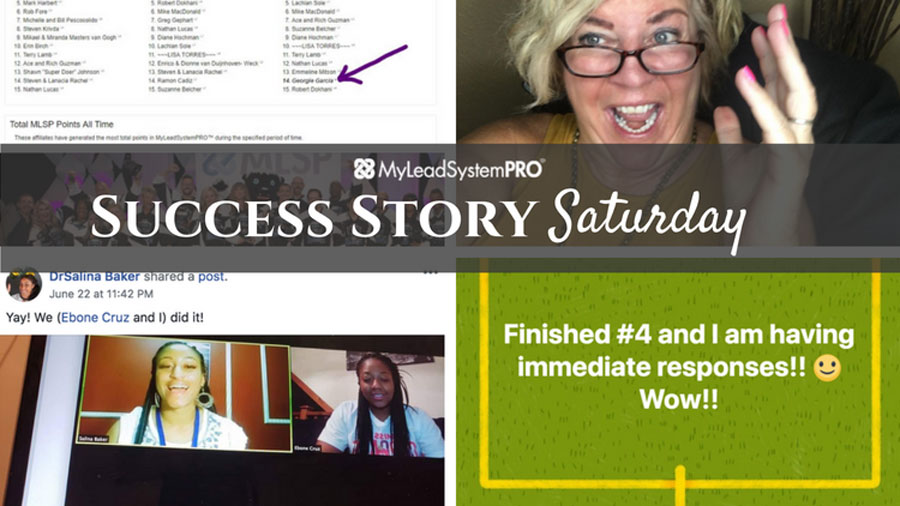 Edgar Betancourt is a new member.

He dove headfirst into Facebook ads and had some pretty amazing success.

“I'm a new and HIGHLY pumped and motivated member!”

He proved that statement quite convincingly for sure! Edgar also went on to say this:

And we're sold on the fact that this dude is a go-getter and is going to do amazing things!

Lisa Thompson has been a consistent hard worker here inside the MLSP community. And now it's paying off big for her!

She just hit the leaderboards and is up there with some of the big leaders.

“I've been a member of this community since 2013 and all I've been doing is plugging into the system, and taking daily consistent action!”

That's exactly what it takes!

“In the past 24 hours, over 400 people have reached out to me and I'm having trouble keeping up with the messages!”

It’s a good problem that Henry Yu is experiencing. He did a little experiment while trying to attract prospects on Facebook this week, and YOU will learn a huge lesson from it.

Here’s what he did…

“I wanted to conduct a small experiment…so I posted twice in this particular group.

Post 1 was pitching, looking for clients…I got ZERO comments on it.

Post 2 was offering a free solution to this group's pain.

Got 103 comments (leads) in just 58 minutes, and comments are still coming in now!”

And within 24 hours Henry had pulled in 400 prospects!

They Hit L4 Inside MLSP!!

This week our power couple from Denmark hit a brand new leader level, and Mikael and Miranda Masters Van Gogh certainly deserve it for all their hard work, and for building so many great leaders along the way!

Here's what's crazy. They've only been members for 10 months, with no idea what attraction marketing was.

You'll want to read their entire post below, but they gave some awesome clues as to how this can happen for anybody.

“How is this possible in just 10 months you may ask yourself? The answer is simple! When you become a PERSON OF VALUE, expecting NOTHING IN RETURN, magic will happen!!”

There ya go. You'll want to make sure to devour their entire post below!

“I just placed my first “free training” link on Facebook. Within a few hours I had 30 people say yes for the info and so far 8 leads!”

Deborah Robertson is a new member and she's already seeing some awesome results inside MLSP!

She's just following the training in the back-office and getting the results that come with simply taking action!

“I made one little adjustment to 2 Facebook posts, and in the week that just ended, I got 88 responses requesting the free training I offered!”

Earl Bryant took some good advice from another leader, and simply went through the training in the MLSP back-office.  He adjusted his Facebook posts accordingly and it paid off quite nicely it seems!

Anna Andrea gave a nice shoutout to her first affiliate ever this week.

Amanda Azizah Bryant has been doing some great stuff inside MLSP here lately, and this week was no different!

Her amazing success using ALL the MLSP Framework to build her audience, engage, and sell.

The cool thing is that she did this with her own recently launched Clean Eating Ebook!

“Just opened my my new group…I already have 104 requests to join!!!”

Holly Fitch Stevens recently spent a weekend at the MLSP Mastermind Workshop. She got help to open her Facebook Group and already is building her tribe in a big way!

At the Live the Dream Event last year, Camille Tyler got some great advice from L6 Leader Rae Getts.

“Leah Rae Getts told me I needed to focus on blogging out good content and become a business coach.”

She since has done 51 posts, and is seeing some awesome results!

So proud to watch her grow, and the awesome support that our community gives each other.

Shout out! “Congratulations for doing his first Facebook LIVE!”

Jim Graf got a huge shout out from his coach Steve Krivda this week!

Doing that first Facebook LIVE is not always easy. Can be nerve wracking for sure.

But those who push past the fear and do it anyway are the ones who move on to the great things that waiting just beyond that fear!

Check Out the Awesome Success Story Posts from Inside the MLSP Community From This Past Week Below! 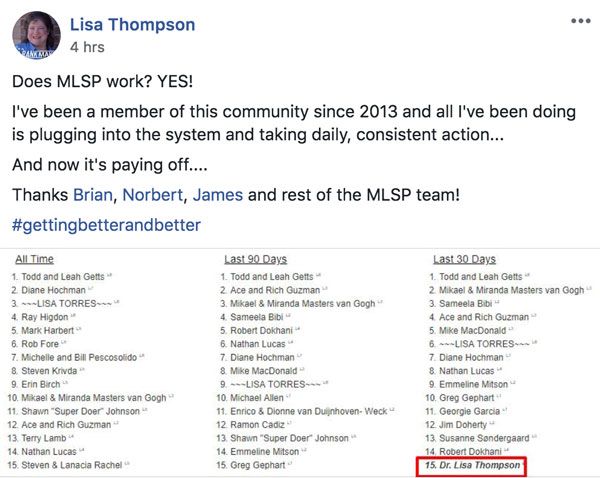 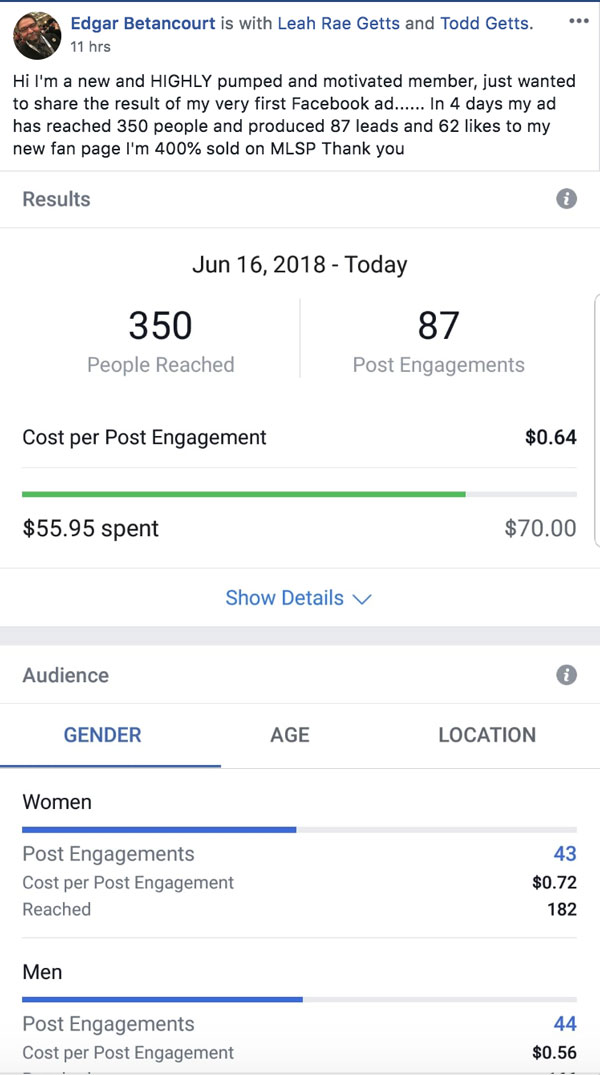 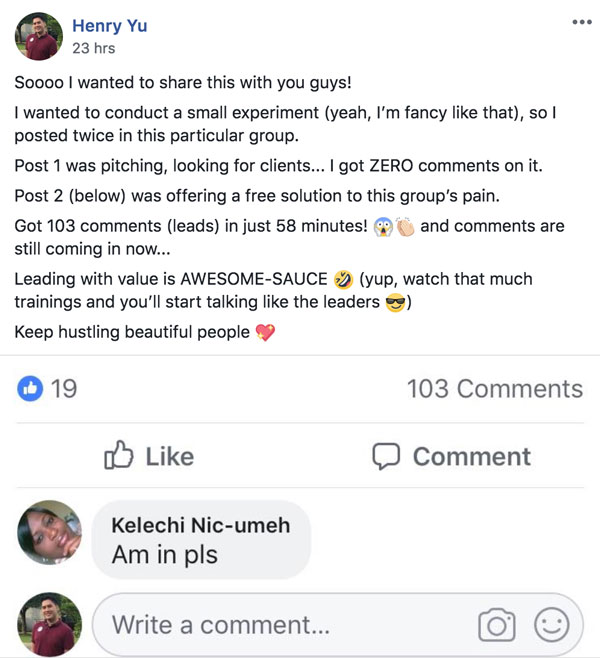 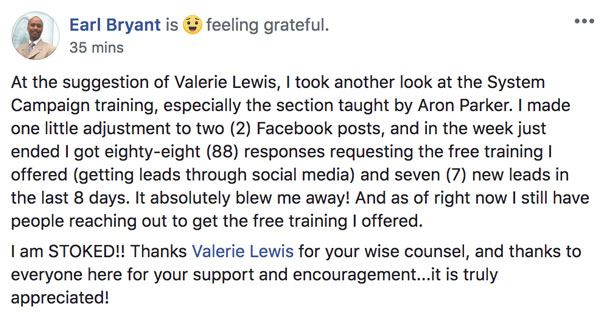 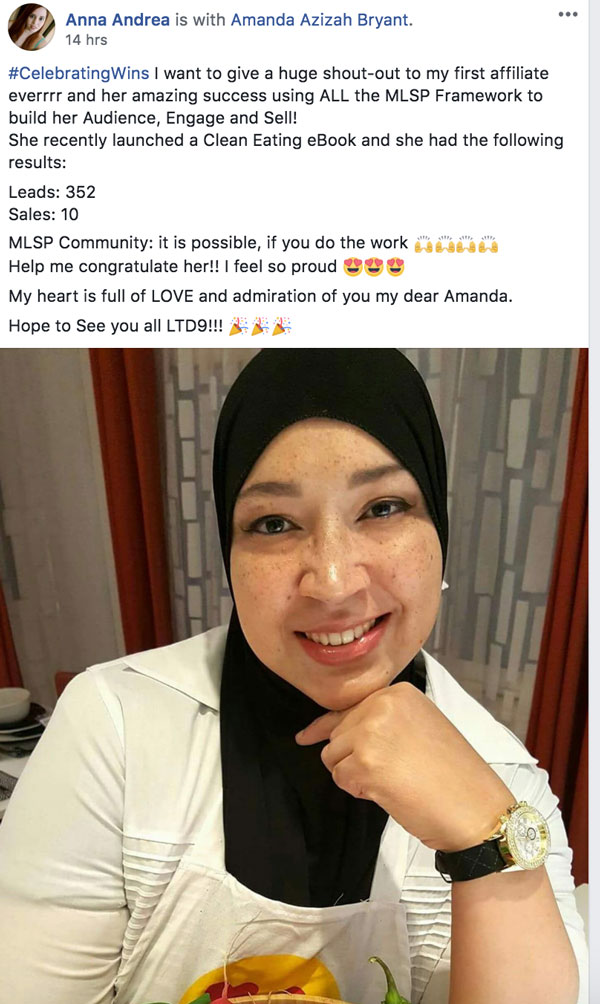 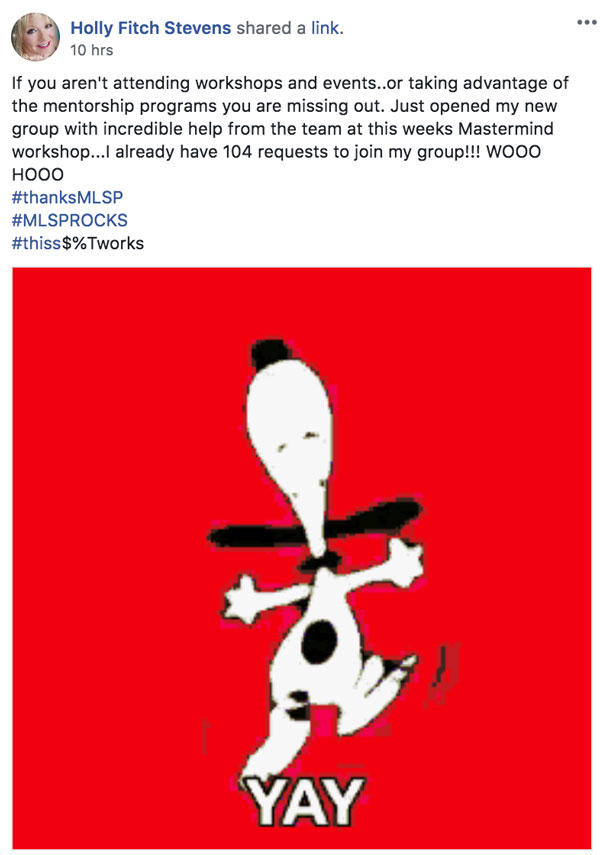 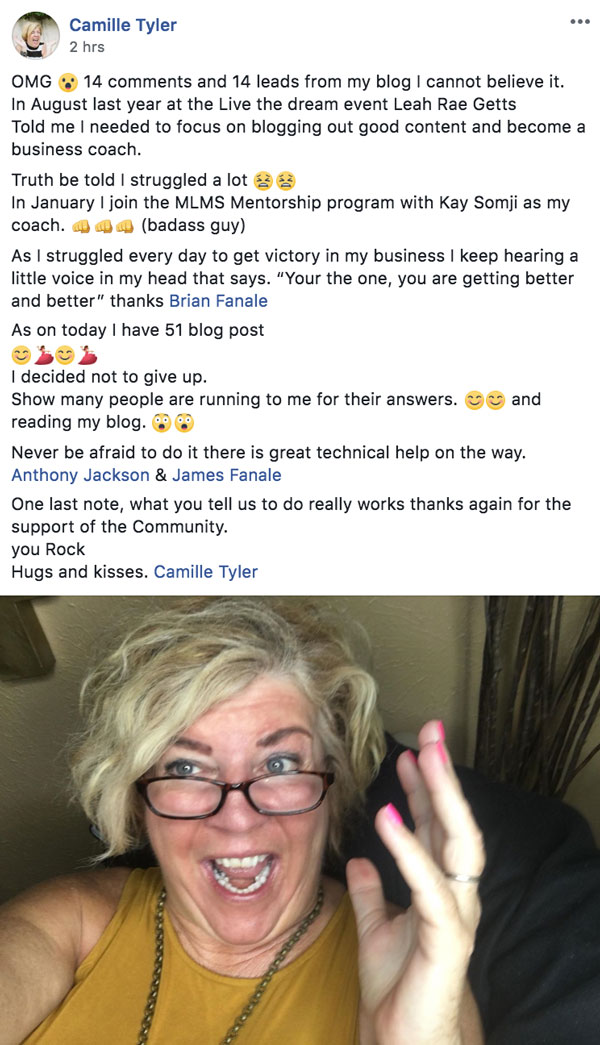 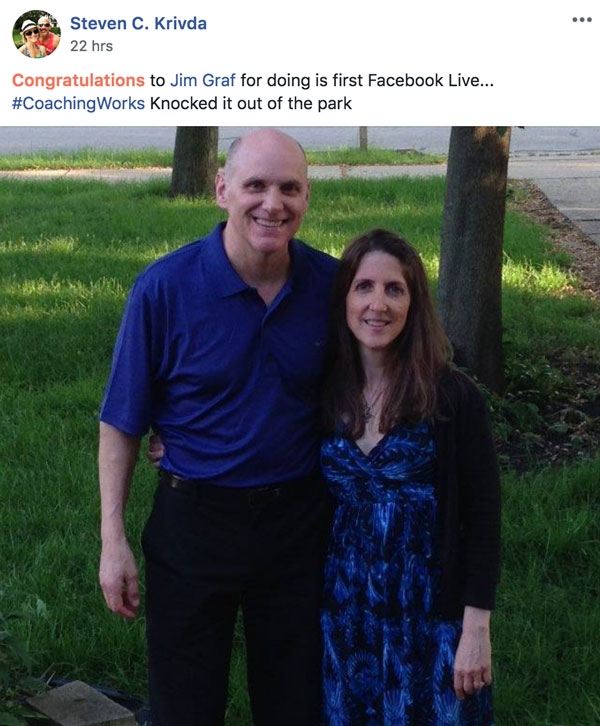