Providing Entrepreneurs with Innovative Solutions, Tools, and Trainings to Brand YOU and Take YOUR Business To the Next Level Since 2008
Menu
RISK FREE TRIAL
Home » MLSP News » MLSP Reviews & Results » [Success Story Saturday] “I Got 3 Confirmed Leads in Less Than 5 Hours!” 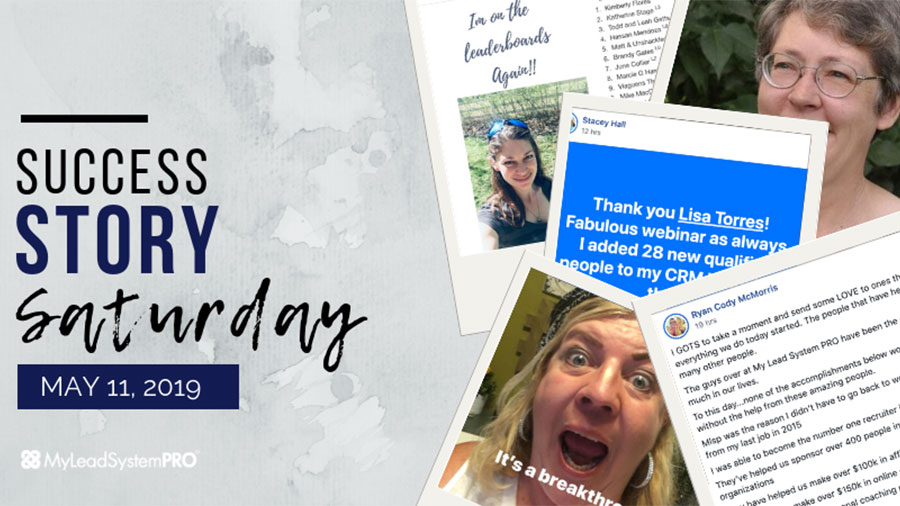 “Wow! This stuff works! First time applying the system campaigns for generating leads and I got 3 confirmed leads in less than 5 hours!”

He used the Aron Parker training right inside the Quick Start Guide and grabbed himself up 3 leads in just 5 hours.

“This will be a breakthrough in 10 days and even a whole month!!”

Congrats Erick, and welcome to the MLSP family!

“I'm on the leaderboards again!!”

Brooke Oakes is back! Back on the leaderboards that is.

This rising star has been hard at work and it's paying off big. Getting on the MLSP leaderboards is no joke. There’s a ton of competition and it takes work, fortitude, and combating comfort zones.

“I finally threw fear aside. I am hosting my first webinar this Sunday evening.”

Uh oh! Watch out. Because a fearless Camille Tyler is a danger to all the competition.

She just chucked it aside, and decided to host her first marketing webinar!

“Brian Fanale, thanks for the webinar script & your blog article training is so loaded with value that I'm having to wipe my chin. Talk about a step by step blueprint. OMG. I don't know why I was so scared. Much gratitude!”

We're absolutely certain that this go-getter is gonna absolutely kill it on her webinar!

Shout Out! “He's only been in MLSP for a short time, and using what he's learned and attracting people to him.”

People are asking Rick Solano about his business.

That's because he's putting in the work, and using the attraction marketing skills that get results! And this landed him a nice shout out this week from Kati Stage inside the MLSP Facebook community!

Shoutout! “Congratulations for using the power of networking and attraction marketing and getting 2 product sales in your MLM in one day!”

Shari Degagne is pulling in product sales this week like crazy. She too earned herself a shoutout from Kati Stage.

Two product sales in one day is no small task. Heck some people would kill for two sales in a week, or even a month. Shari did it in a day!

“I added 28 new qualified people to my CRM by inviting them [to the Wednesday Webinar].”

BOOM! Stacey Hall is at it again. She was our April Member of the Month and she just keeps crushing it!

She invited folks to watch the Facebook Challenge Webinar with MLSP L6 Rock Star Lisa Torres and people responded kindly. 28 of them became leads. Not bad at all!

You can do the same as an MLSP affiliate.

L5 leader Ryan Cody McMorris jumped in the MLSP Facebook Community this week, and he had some great things to say about MLSP.

But more importantly, Ryan revealed some of the amazing results HE has achieved over the past few years, and it shows you and the community exactly what's possible when you do the work.

“I'm probably missing some stuff. But the point I want to make is that if there is something you want to accomplish, IMMERSE yourself in a community of people that can help you get there!

Guess he proved himself wrong.

He gives MLSP lots of LOVE and credit in his post… but the truth is he's the guy who went out there and made it happen.

And for that we give him massive credit, and we're grateful to have a champion like this inside the MLSP community! 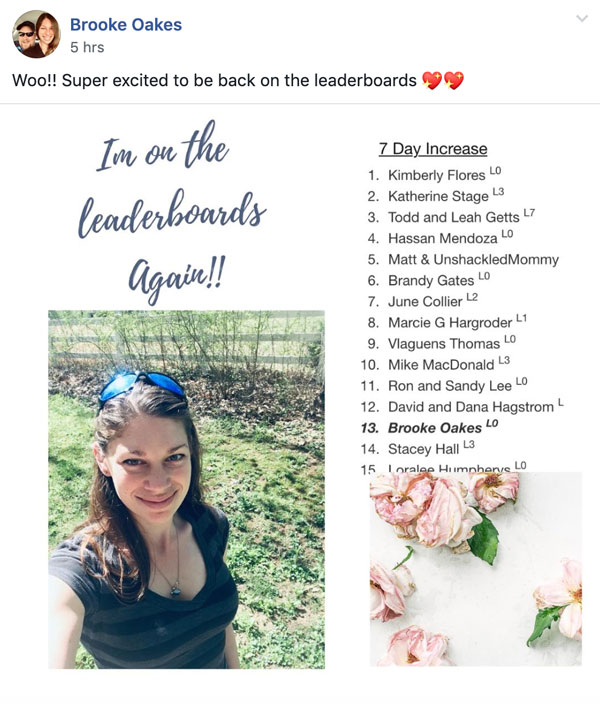 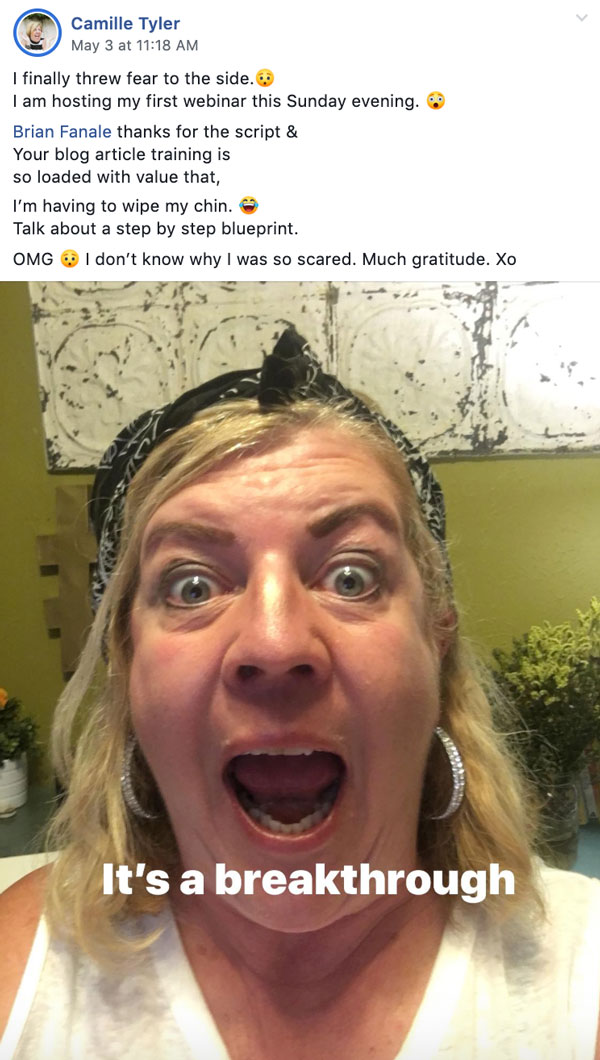 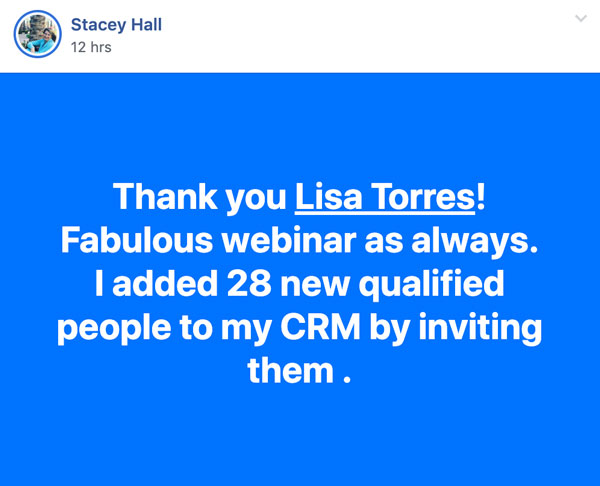 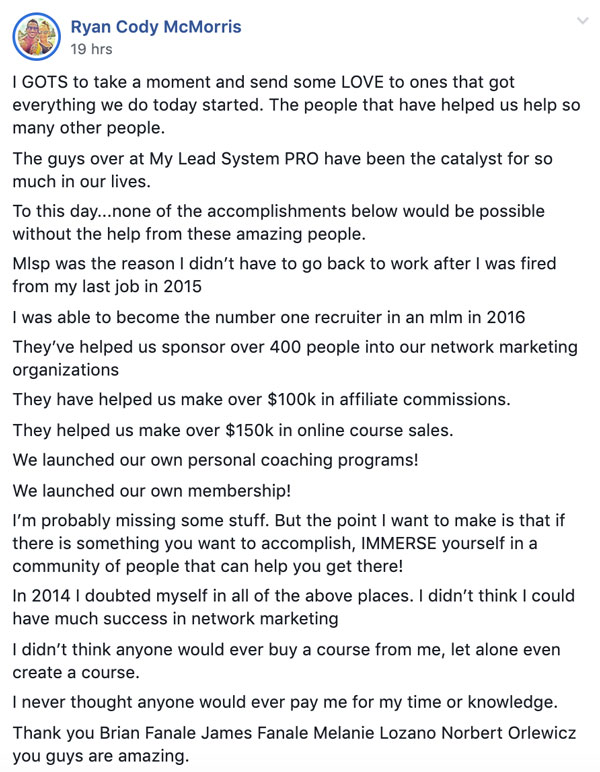