Providing Entrepreneurs with Innovative Solutions, Tools, and Trainings to Brand YOU and Take YOUR Business To the Next Level Since 2008
Menu
RISK FREE TRIAL
Home » MLSP News » MLSP Reviews & Results » [Success Story Saturday] “I Signed Up My First PAID Coaching Client…at $2000 Per Month for 3 Months!” 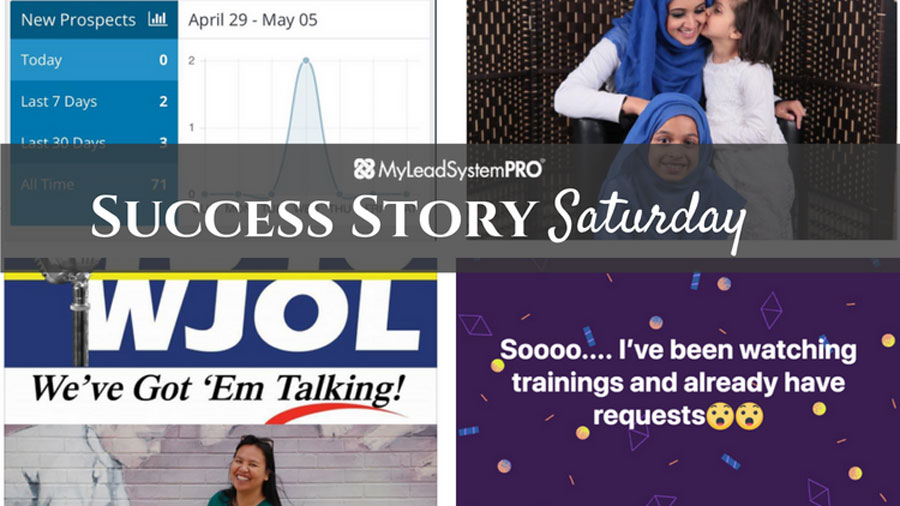 Looks like Alex Ford is seeing the benefits of MLSP coaching himself.

“3 weeks ago exactly I had my first Strategy Session with Norbert Orlewicz, after signing up for 6 month worth of coaching in MLSP. From that 2 hour session alone, I got sooooo much value. I literally had 100 questions that I had going around in my head for years… finally answered!”

Alex immediately went into action mode and saw some pretty profitable results, that may keep on going for him in fact.

“Plus — they said they wanted it to be ongoing, so it's potentially an extra $24,000 added to my income per year”

You'll want to make sure you read his entire post from inside the MLSP community (screenshot posted below), because it's a powerful display of just how important coaching is for your bottomline!

“While I was in my PJ's last night…$300 commission came through my email. Thanks MLSP!”

Candace Bui-Walston had some wins this week, and we're so happy she decided to share them inside the MLSP private community.

$300 commissions flowing in while in you're in your pajamas “watching ‘Iron Chef America'” is cool enough.

But that wasn't all for Candace…

“This morning out of the blue, was contacted by a local radio show host to invite me on his radio show tomorrow to talk about Social Media.”

Now that's really cool! And that's exactly the kind of thing that happens when you learn how to truly use attraction marketing to build your business!

“I finally got out of my slump and took action, and here is my name for the first time on any leaderboard.”

BOOM! Ainsley Stewart was throwing a “Small Win Party” this week inside the MLSP community, and rightly so!

She hit the MLSP 7-Day Increase leaderboards for the first time this week.

Out of the slump and doing the work. ACTION!

Great work Ainsley! Please keep sharing those victories with us! None of them are small, because they all lead to something so much bigger!

“I've been watching trainings and already have requests!”

It sounds like Ellen Garvie has been doing more than just watching these trainings.

“If I can generate prospects using the [MLSP] system campaigns, and Weekly Webinars, anyone can.”

Robert Morris seems to be leveraging the MLSP content for leads and that's what it's all about.

We love to see it! Looks like he's having some great luck with promoting on Twitter as well…

“I love Twitter as a news source and sharing Blog Posts. Twitter is more friendly with that than FB.”  It certainly can be when you've got a winning Twitter Strategy!

Shoutout from the CEO! “You just got 6 sign-ups in a matter of days, you're brand new to MLSP”

6 sign-ups in a matter of days is pretty significant. And where else do you see the CEO get that excited about the success of his members? We’ve got the most supportive community in the world.

Mr. Aron Parker walks the walk! Not only does this dude get results for our members with his awesome trainings, but he's getting them for himself as well.

“Once you figure it out, it's easy peasy! Know what your audience wants, give it to them! It really is that simple. Sometimes I think we overcomplicate it. MLPS has given us all the tools and training to succeed…now do it!”

“If a guy from a Third World Country can make MLSP work, ANYONE can.”

Dave Reineke isn't letting any type of circumstances get in his way. Especially location.

“I use FREE methods taught inside the training. Because of my country I am stopped from using some paid methods. But I made it work. I just never stopped working!”

Anna Andrea is pulling some serious subscribers and getting some great open rates as well (You can see her screenshot below!)

How can YOU do what she's doing? She actually revealed it and it's pretty simple…

“Having brand clarity, Vision Clarity, a Self Development Routine, and Marketing Strategies in place. That's the secret. Finding who your tribe is and how YOU can help them, and telling them why they should care.”

“My sailing club approached me about growing the membership…I applied all that I had learned from MLSP…and 19 days later we were sold out! LOVE IT!”

Brad Olinger is proof that that strategies we teach at MLSP work for any type of business…even a sailing club?

“The sport of sailing has been in decline for a couple of decades. Anyway, I applied all that I had learned from MLSP. Build a WordPress site, created a campaign (FREE WEEKEND PASS), tested Facebook ads, and 19 days later we were sold out. LOVE IT! The club is now growing, and the leaders are astounded. Thanks MLSP!”

“Wowzers! I was able to ‘fire my boss' and go full time RV’ing one year ago today”

Now she's living the dream, traveling around in her RV! How cool is that?

How does one get to do that?

Well Kati did not leave the community hanging this week. You'll want to read her full post in the screenshots below. But here's a snippet that's important…

“If I could offer 2 small pieces of advice, something that's worked exceptionally well for me over the years?

First surround yourself with Loving Mirrors, those who challenge you to see your own value…

The second is to stop waiting to “be ready.”

Make Sure to Check Out the Full Success Stories Posts Below… 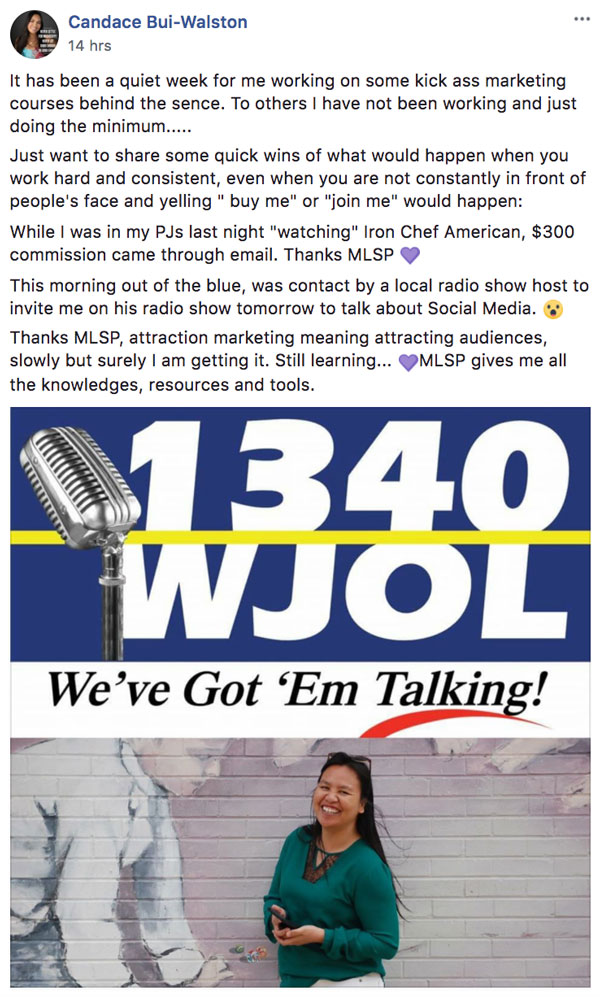 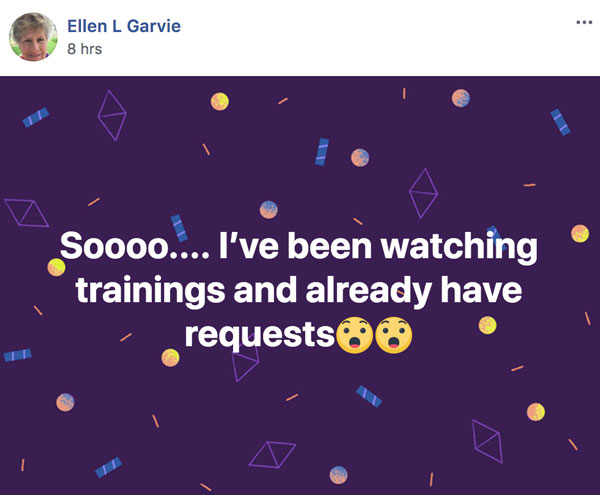 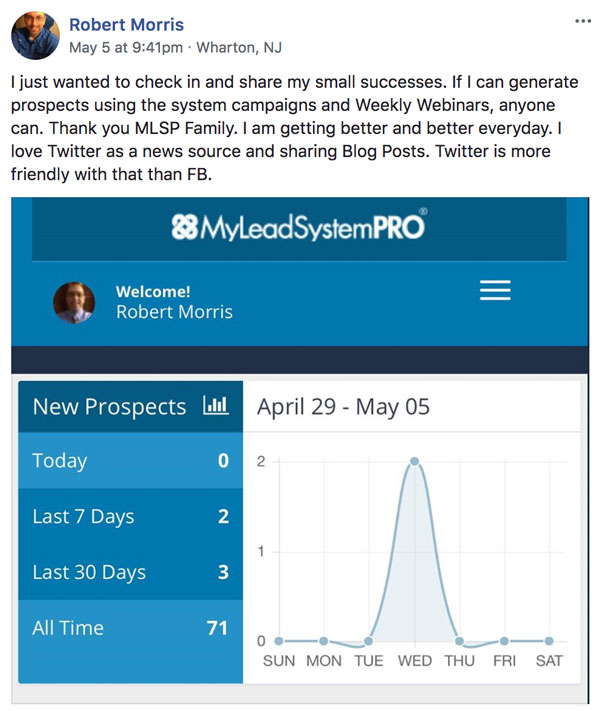 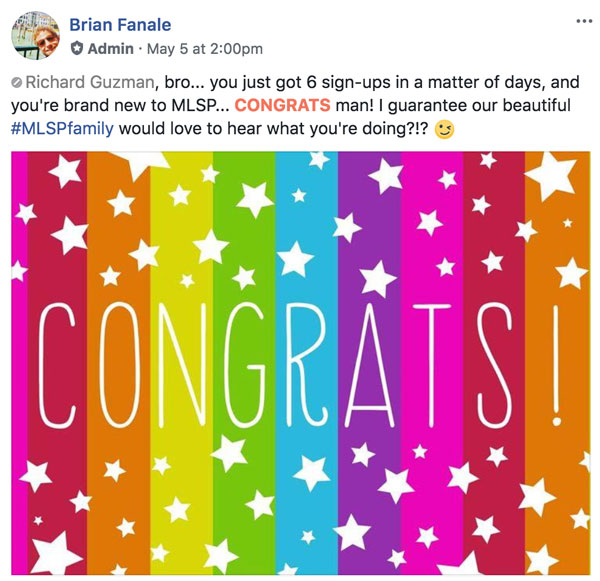 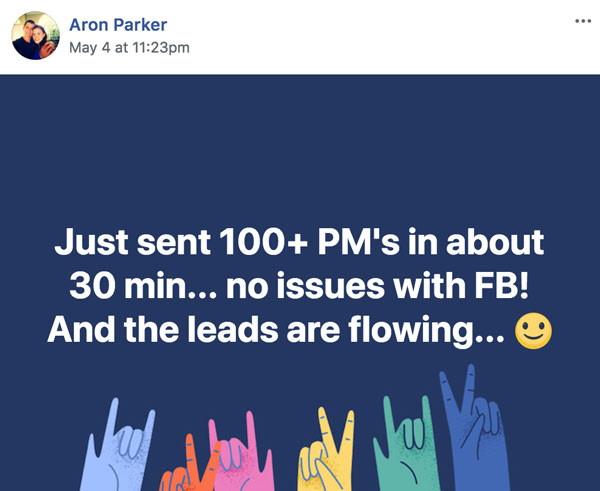 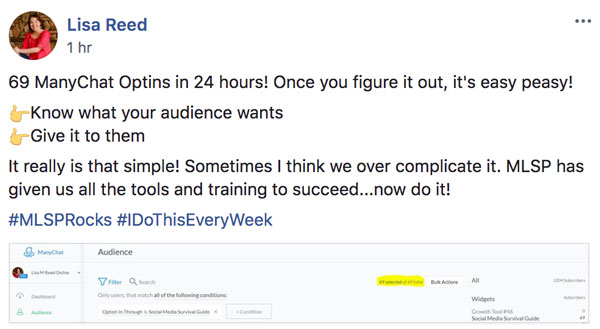 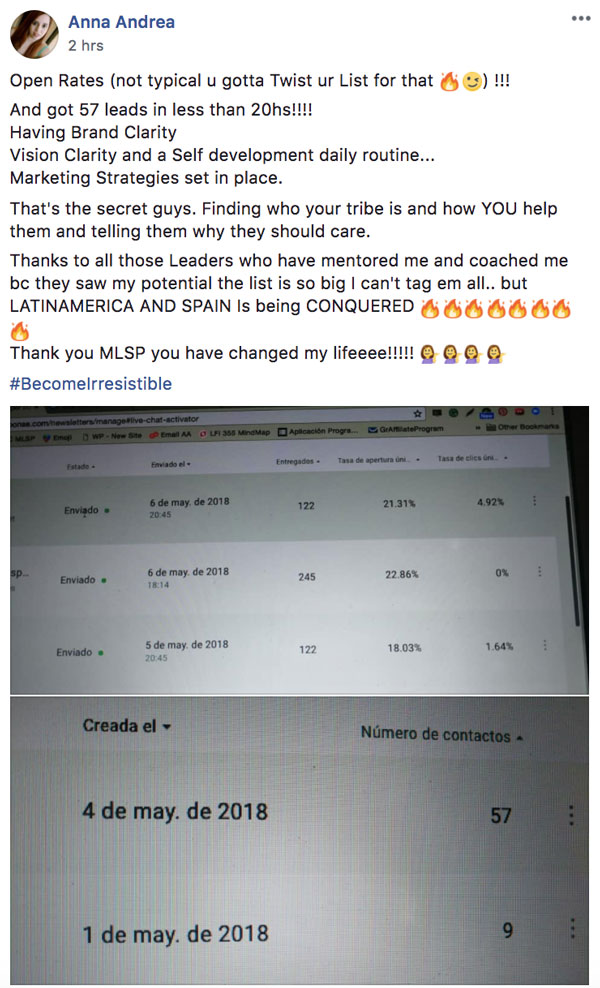 Previous Post
Video Marketing Tips: 5 Simple Strategies to Get Leads and Sales for Any Business
Next Post
MLSP Week-in-Review: May 7, 2018