Providing Entrepreneurs with Innovative Solutions, Tools, and Trainings to Brand YOU and Take YOUR Business To the Next Level Since 2008
Menu
RISK FREE TRIAL
Home » MLSP News » MLSP Reviews & Results » [Success Story Saturday] “I Just Hit All Time Leads Generated in MLSP!!” 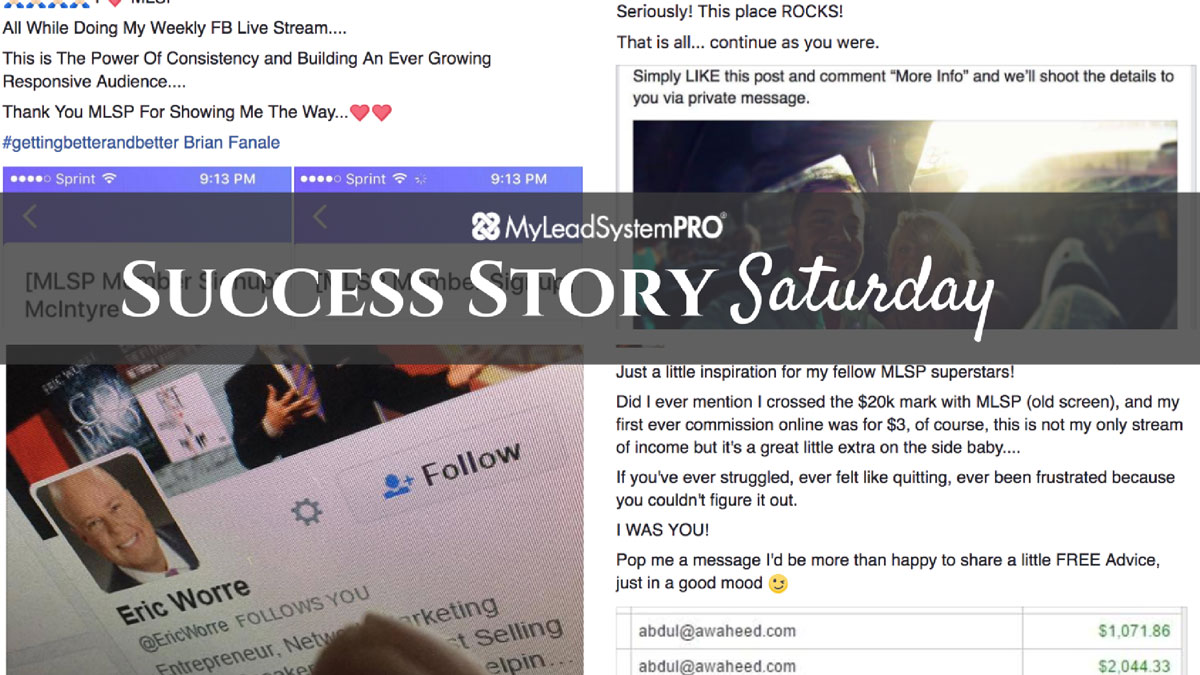 One of our top leaders just stepped up his game a huge notch.

Mark Harbert's been on the “All Time Total Leads” list for years! But today he found out that he was #1 on that list for the first time ever!

But it's in no way surprising. This guy is a workhorse. He came back from a devastating corporate job loss where he literally lost just about everything but hope!

He kept that…and included some MASSIVE ACTION as fuel, and turned everything around in about 90 days! He just never slowed down after that, and now he's #1 on our total leads generated leader board!

This guy deserves a huge congrats not just because of this achievement, but for the countless lives he's changed on the journey here. Always puts out massive value. Always encourages. And tells it like it is!!

“Justice said it would happen…BOOM!

Brian Garcia watched a training last week where L4 Justice Eagan showed how to use story ads on FB, and then he did something that many people who watched this same training probably didn't do.

He simple DID what Justice said. Did it work? Could it be that simple?  We'll let Brian explain it:

“Justice said it would happen…BOOM! Just had the first of many comments!!! As well as 4 people LIKING… and I literally just pushed this live a couple hours ago)”

We do these FREE Trainings every single week. Twice a week in fact.

The cool kids just got a new member to their club.

She goes on to say “Joined just over a year now and started earning from month 1 and ti's never stopped increasing month after month!!”

Well now. Here's another example of what happens when you take advice and take action

Krista Ziobrowski was wise enough to take our only L7 Leader Diane Hochman's advice and now she's killing it with her business!

That should sorta be a rule that everyone follows. When Diane gives advice…take it!!

Cecilia Younge had a coaching call with Keysha Bass this week.

As all great coaches do, Keysha pointed  Cecilia to a place that she knew would help her. She told her to go watch Diane Hochman's “Get Leads Today” training.

Like all great students do, Cecilia listened, watched the training… And low and behold she checked her email and had 3 LEADS and 1 new sign-up.

You'll want to read Cecilia's entire post below, because there are some gold nuggets in there!!

Jada Ingram Fuhrman is another one that did what she was advised, and look what happened?

Are you starting to see a pattern?

“So far I signed up two people to Mastery Trial this week.”

As you'll see in his SSS post below, Nurul Chowdhury left the industry in 2010 “because I had no clue what I was doing” as he put it.

He came back last year and now, because of what he's learned inside MLSP and the action he's been taking, he's seeing some awesome results.

2 trials in a week! More weeks like this and Nurul should be a new L1 leader soon enough.

Keep it up Nurul and can't wait to see you with that L1 in front of your name!!

Greg Martin is another action taker this week.

He took on some MLSP Coaching from coach Antonio Thompson and did what he was told for FB marketing. And now he's getting leads for 61 cents each.

He cited this quote from Mike Dillard that's ringing true for his own business:

“The moment you realize how you can put $1 into your marketing get $1.20 back, you've hit the jackpot.”

Greg's pumped, and so are we!! Great job sir!

Mike Anthony is at it again inside MLSP. This guy makes this blog post quite often, and this week is no exception.

Make pulled in 2 people in 90 minutes. Most people would kill to get that in a month, much less an hour and half!!

As you can see, the theme of the week is once again ACTION!! What action will YOU take this week to get onto this blog post?

Go down and read all the Success Story Saturday posts, get inspired, and follow the breadcrumbs that these members are leaving for you! 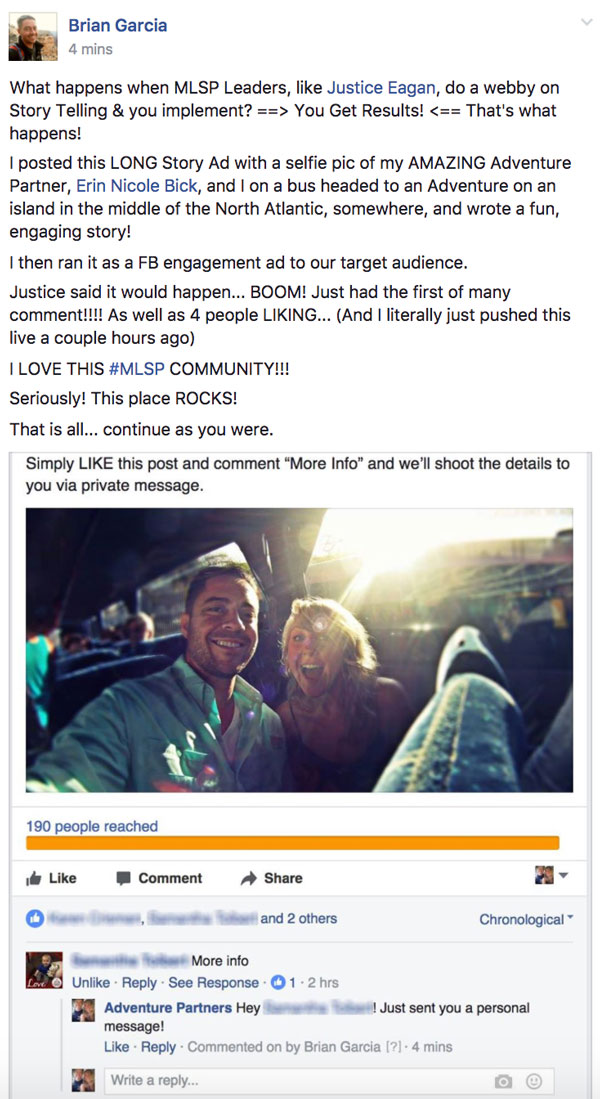 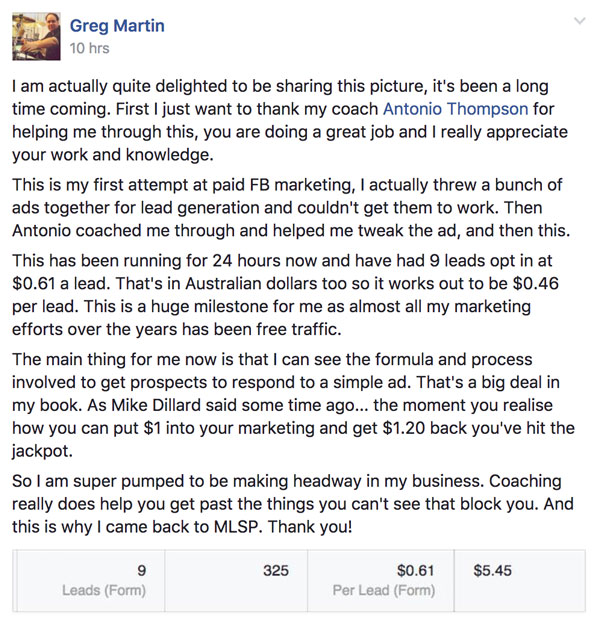 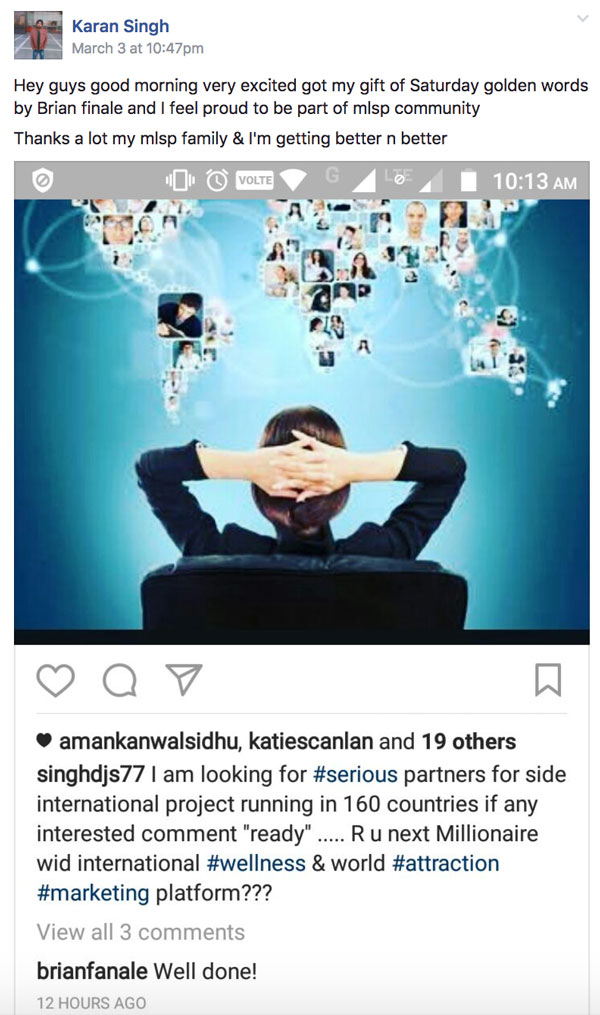 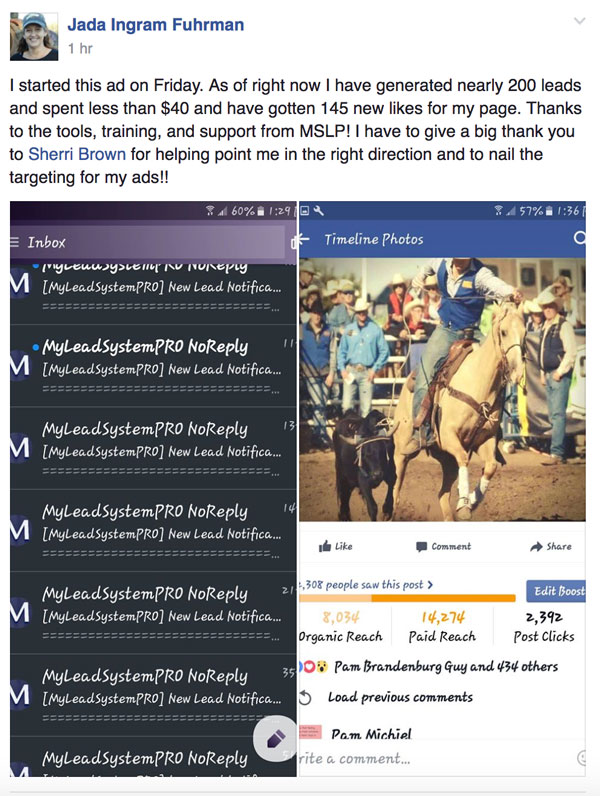 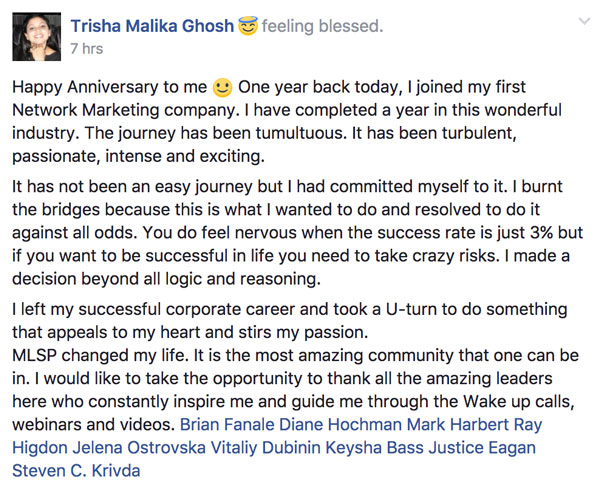 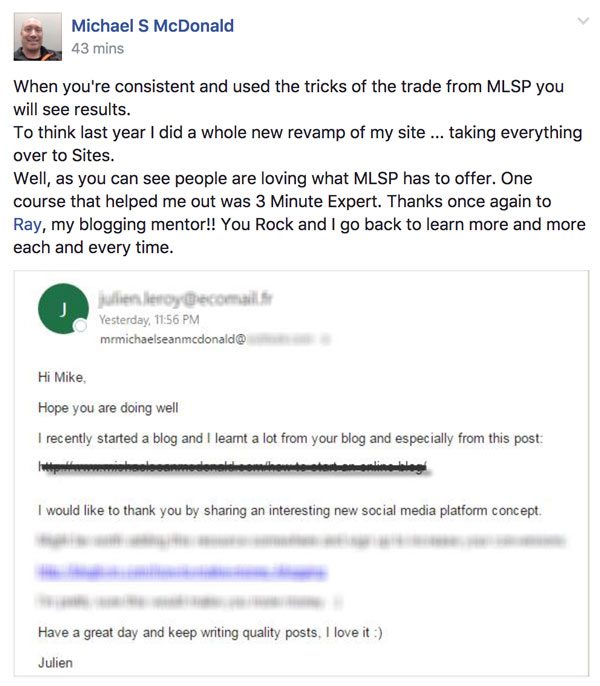 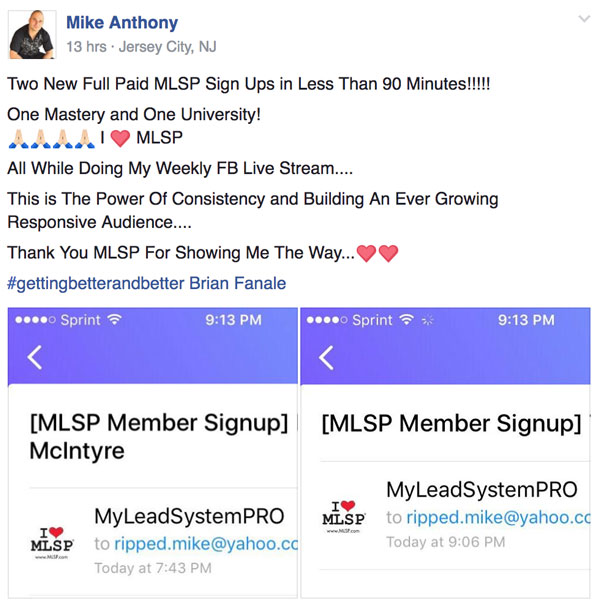 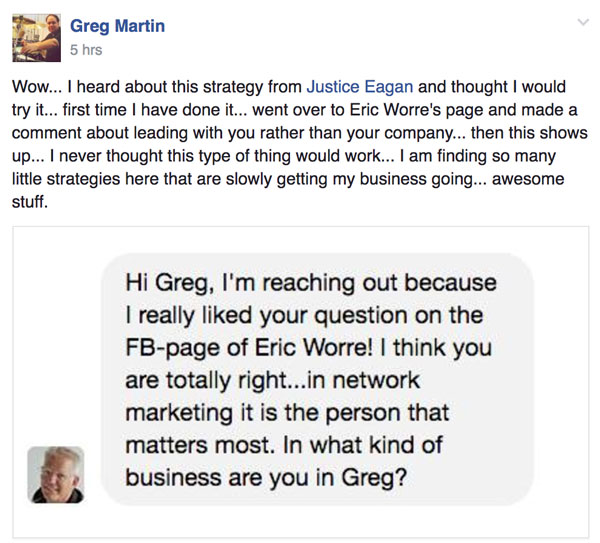