Providing Entrepreneurs with Innovative Solutions, Tools, and Trainings to Brand YOU and Take YOUR Business To the Next Level Since 2008
Menu
RISK FREE TRIAL
Home » MLSP News » MLSP Reviews & Results » [Success Story Saturday] “One Year After Joining MLSP I Hit 6-Figures!” 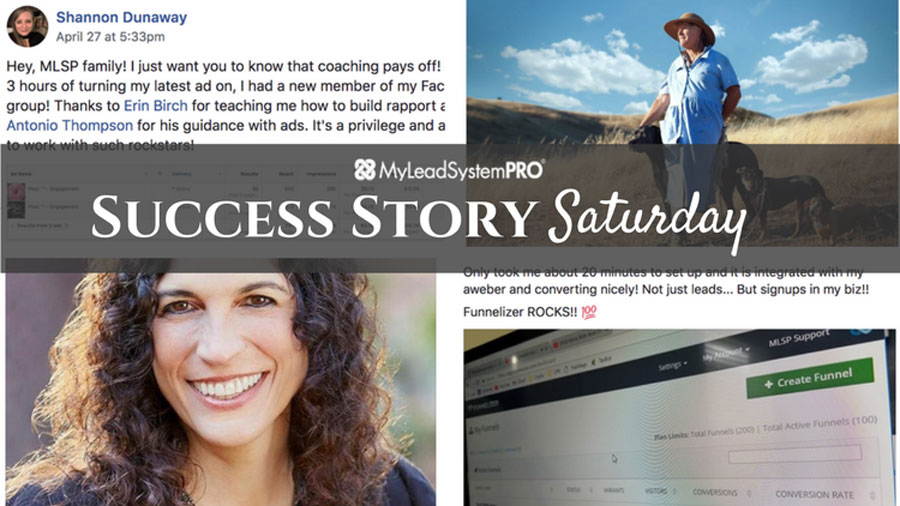 This week Erin Birch had something BIG to celebrate.

“3 years since I realized the way I was marketing was keeping me BROKE!…Today marks the day that I FOUND MLSP!!”

You'll want to read every single bit of the amazing post in the screenshots below from our private MLSP community.

But here's something that we want to highlight that Erin said. It’ll inspire the heck out of you, and help you get through some struggles that you might be having now…

“It was always my dream to travel the world and be able to do so whenever I wanted to, and now I get to live my dream!…But it didn't go so well in the beginning. Doing what I was told to do WASN'T making me squat. My first 4 months, before MLSP, I made a grand total of $300. I sponsored only 3 people into my biz… One year after joining MLSP, I hit my first 6 figures!

Be sure to read everything below, because Erin dropped some gold in this post about what it takes to become a highly effective attraction marketer fast in this profession!

“I did it again this week!! I generated over 200 leads in a 48-hour period using FREE methods”

Jeanne Hamra is killing it week in and week out.

“My coaching business is ON FIRE because of the skills I've learned from the MLSP education!!”

BOOM! So awesome to see!

“In the last 24 hours I have generated 16 leads and have one person so far that converted to a 10 day trial.”

How'd Paul get those results? He revealed exactly how inside the private community this week and we’re going to share it with you too!

It's in your back-office right now if you're an MLSP member. If you're not a member…why not?

“About 20 minutes ago I generated two leads. One of which has converted.”

Pele Ekepedekumo is getting results with the landing pages found in the MLSP campaigns.

“I think I can honestly say these landing/capture pages convert like crazy!!” Boom!

“Woot! And yet more sales rolling in thanks to coaching!”

Carrie Bannigan is proving once again this week that coaching works!

Her coach gave her two tweaks to make, and sales started rolling in.

Here's what Carrie said about the importance of coaching:

“If you haven't invested in yourself and your business, I HIGHLY recommend that you do! Having successful knowledgeable coaches to help you establish a clear plan and be there to guide you is SO VALUABLE!”

Great work Carrie! (You can find YOUR coach here!)

“Within 3 hours of turning my latest ad on, I had a new member of my Facebook group!”

Shannon Dunaway is also seeing the benefits of coaching. Here's what she wrote inside the private group this week:

“Hey MLSP family! I just wanted you to know that coaching pays off!”

The results that Shannon is getting is proof!

Manzer Young was able to create a simple $5 Facebook ad that converts, sent prospects to the capture page he made with his MLSP Funnelizer system, and is able to follow up with the MLSP CRM!

“I woke up to an email that I just got a new lead. I did it again!”

Rispah Jonsson is waking up to leads. Very few things in life feel as good as that.

So glad this inspiring lady is able to experience it. More glad that she's sharing the good news inside the MLSP community!

Suzanne Welsh had to think Aron Parker for his system campaign training. Because it's still working like gangbusters for her!”

“I loved promoting tonight's webinar!…Leads poured in and still more wanting in on this training.”

Georgianna Garcia is pulling in leads from the Weekly Wednesday Webinar!

And the one with MLSP's top affiliates L6 Todd & Leah Getts and their Twitter Strategy training was a doozy this week!

But that's not all the results that Goergianna got…

“Also grateful because over the weekend commissions rolled in due to the amazing coaching from someone who pours his heart into what he does!”

She of course was talking about her coach, the great Steve Krivda!

“Started yesterday and have two leads in the system, and just getting started.”

Tony Canevero is enjoying the leads rolling in, and who can blame him?

Off to an amazing start! Way to take action sir!

Gena Pino got a nice shout out from her coach and superstar Jelena Ostrovska!

Imagine reeling in $1K, just from a simple Facebook LIVE?

Scroll Down and Check Out All the Success Story Screenshots from Inside the MLSP Community Below! 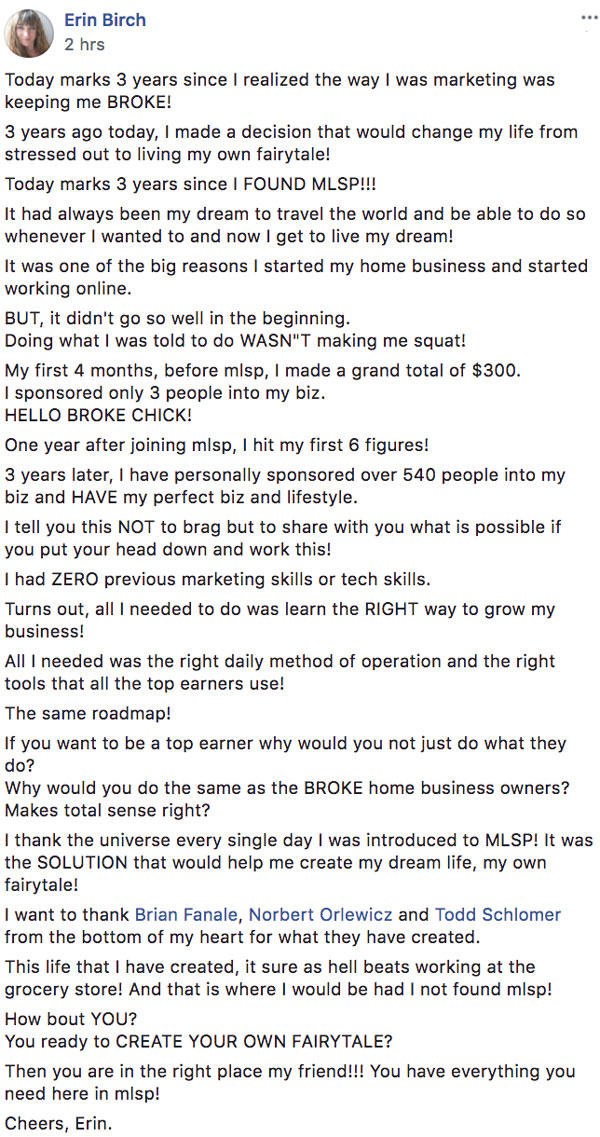 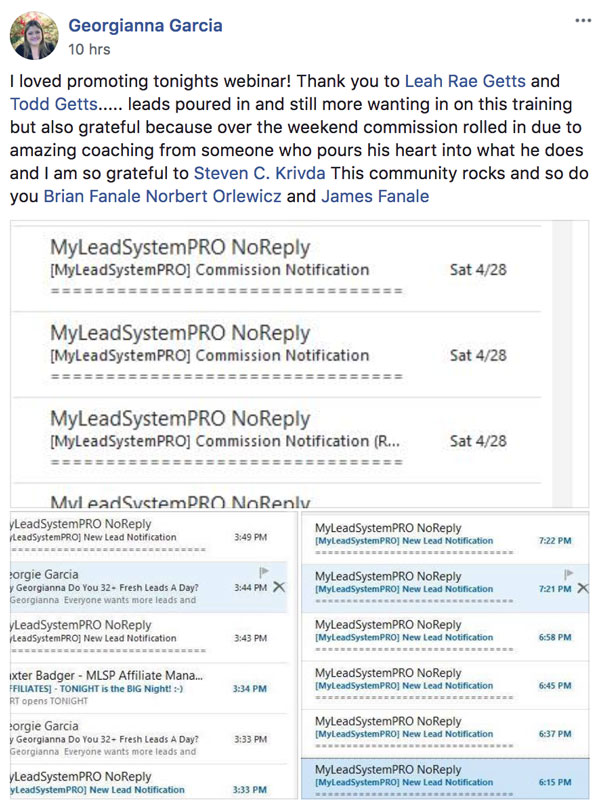 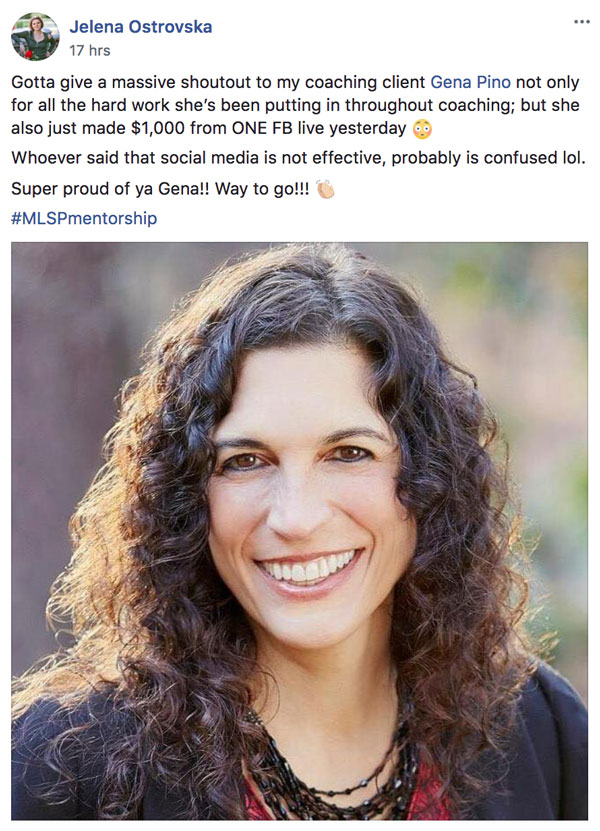