Providing Entrepreneurs with Innovative Solutions, Tools, and Trainings to Brand YOU and Take YOUR Business To the Next Level Since 2008
Menu
RISK FREE TRIAL
Home » Personal Development » Mindset: Get Inspired » The Power Of A Single Conversation 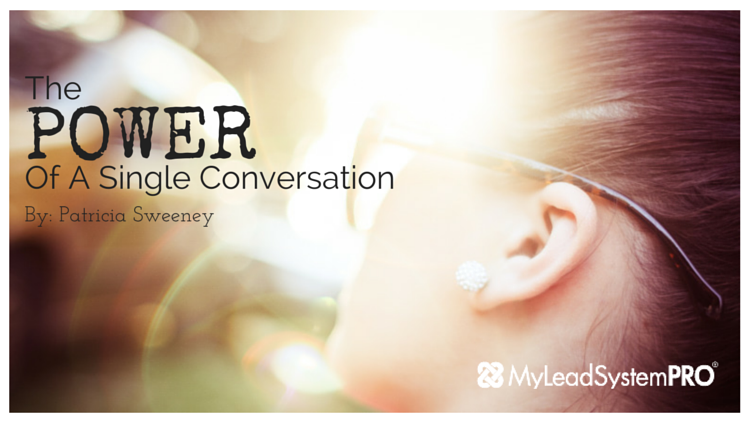 I have a quick story to share with you and at the end, you will have two questions to ask yourself. They are powerful and important and may just determine how your entire year (and maybe even your life) turns out.

Exactly 24 months ago I was tired of not being able to plan anything to do because there was no money. It was really at the point where I was struggling to keep the lights on, being unsure of how the mortgage would get paid – and that was after I filed a chapter 13 to ‘hang on to it’ to begin with. The list goes on with my woes at the time, but bottom line……

I was not the driver of my destiny.

I was in pure reaction mode.

I wasn’t happy and I did not see a light at the end of the tunnel.

So I made a decision. I changed the tunnel I was looking down. I decided to walk a new path.

Within two weeks of making a decision to no longer just accept and bumble down the tunnel of a crappy life – I found My Lead System Pro. At the time I did not have any idea what I really had my hands on, but I surely did see a lot of potential. Little did I know, that was just the tip of the iceberg.

Fast forward a few months, after the confusion of getting started and the struggle to form a new schedule of productivity – I was coming into my own and I had my first four figure month. That’s when I knew, deep down, that this was REAL. That I could actually make some money at this internet marketing thing and that I was finally going down the right path.

A few months later I found myself at the first internet marketing event I had ever attended. I was a little nervous finally meeting all these awesome folks face to face for the first time. We had been “hanging out” online for a while and they felt like my closest compadres – a family really! – but it was still nerve wracking in the best sort of ways.

One night at this event, after the main training and after party, I finally left the after-after party and was walking through the lobby finally calling it a night at about 4am – and that’s when I ran into someone I had never even hoped to speak to in person. I mean jeez…. This person was a multiple 7 figure earner. A total legend in the industry… and well… I was just little ‘ole me. I almost didn’t muster the courage to even say hello. It was 4am after all – maybe they didn’t’ really want to be ‘bothered’ by a fangirl that time of the night (ya know, after the after-after parties!).

But I did it anyway. I mustered up my courage, walked right up to them and introduced myself. I even asked a question of them because I thought they would have THE ANSWER to the one question I knew would explode my business (in my mind at least!). Instead of getting a black and white answer, I got hit back with a question. It went like this.

Q: If you know where you want to go, what are all the possible things that could stop you from getting there from where you are today? When you identify those things, and figure out the clearest path to eliminate all of those things, you’ll have the answer you seek.

So to be honest, I had to get them to repeat the question a few times… (it was 4am after all, give me some slack!) But it was a profound question. The best part was, that sparked about a 45 minute, off-the-cuff conversation right there that morning that totally changed the way I THOUGHT about my business, my vision and the value I wanted to bring to this industry.

I pondered that conversation and the ideas I had gathered that weekend at this event were swirling around in my head like crazy. On the plane ride home I spent the entire flight time (on both of my flights to get back to the east coast) writing down all my plans and ideas furiously in a notebook. I mapped out my plan. I drew concrete lines in the same of what I would and would not do, of where I would be going. Then when I got home, I got to work.

Less than sixty days later – I had grossed more than a teacher would make in almost three years.

I did not know for sure something like that would happen.

I had only hoped it would and could for ME. I always believed other people could do it and were doing it, but what about ME…..

When I made the decision to go to the event and muster my courage to strike up conversations and dig in with those who had come before me – the magic happened. Just like ‘they’ said it would.

Now….exactly 24 months after making a decision – here I am today with a different life and staring down a dramatically different tunnel and forging my own path in my own way. Yes it has been a scary journey. There were times when I wanted to give up. I will however be forever grateful to MLSP and all the conversations I have had between then and now that have allowed this massive change to happen in my life.

I know that if I had to do the last two years all over again, I would not change a thing. I would show up to our Live the Dream Event (yes that was the event I went to that changed everything) and I would take every single opportunity to mastermind in intimate close-knit settings with the masters at this game as soon and as much as I possibly could. I still go back to that notebook to revisit my vision and re-inspire myself to get busy and set bigger goals. It is still a guiding light that keeps me focused on the right tunnel. I will never be that person who wasn’t in control of her destiny again. How about you?

So here are your questions:

I wish you all the best my friends.
Here’s to crushing it in your business.
See you at the top,
Patricia Sweeney
L4 Leader and Master Marketing Team Member
http://mlspmastermindretreat.com/
http://livethedreamevent.com

Previous Post
Leverage! The Secret Marketing Tool Everyone Can Use
Next Post
MLSP JANUARY MEMBER OF THE MONTH: Vitaliy Dubinin

Offline & Online Entrepreneur. Internet Marketing and Network Marketing Professional. Patricia created a sustainable six-figure income for herself online in under 18 months and gives back to our MLSP Community as a speaker and trainer as part of our Master Marketers Team.
Ready to grow your online business? This is a lady you should talk to.